Later this month standout British junior Arthur Fery will follow in John McEnroe’s footsteps by enrolling in the tennis programme at America’s prestigious University of Stanford.

Taking a scholarship to play on the highly competitive American college circuit is a road increasingly travelled for aspiring professionals, with few players now breaking through before their twenties.

Fery’s background, however, breaks from the norm in its cosmopolitan dimensions, despite him having been brought up barely a serve and volley away from the All England Club. 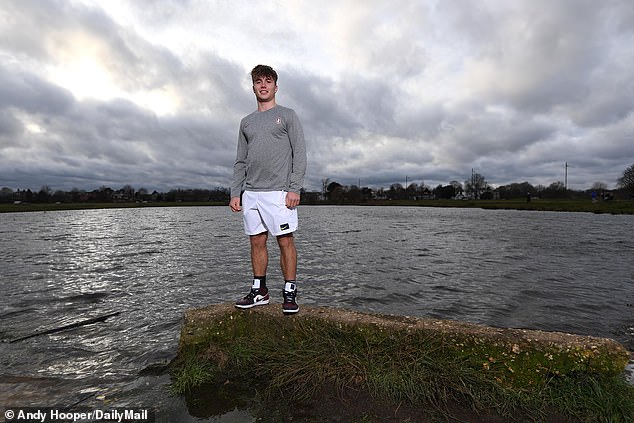 Both his parents are French, and steeped in the worlds of tennis and football. Dad Loic has a highly successful career in the world of London finance and bought French Ligue One Club Lorient when aged just 35. His mother Olivia featured on the WTA circuit in the early nineties and played at the French Open.

The couple having relocated to London 20 years ago, Arthur is very much made in Wimbledon. Earlier this month he was practising with Dan Evans and Andy Murray at Roehampton’s National Tennis Centre.

The development of junior sporting talent is a serious topic in the Fery household, also home to a younger brother and sister.

Upon taking over Lorient in 2009 the first thing Loic did was to overhaul the club’s academy system. Among its ‘made in Lorient’ players since then has been Matteo Guendouzi, the Arsenal midfielder currently on loan at Hertha Berlin. 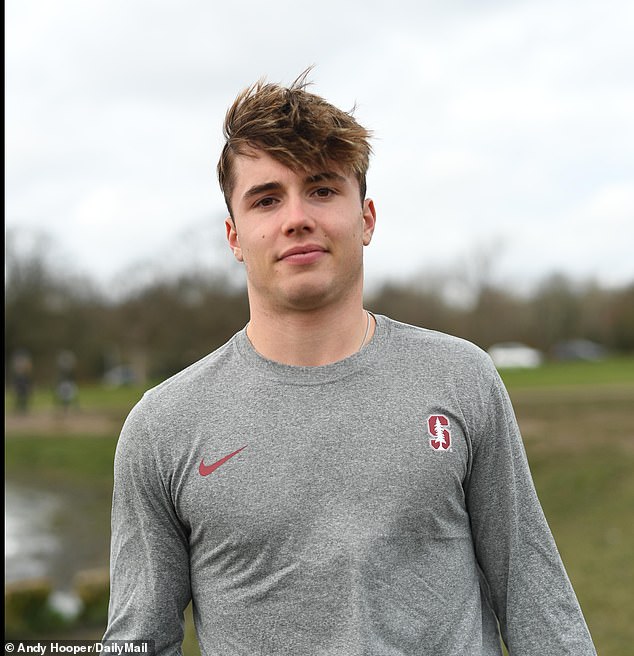 When it comes to their eldest son’s chosen sport they have placed a major emphasis on education. Arthur will head to California armed with three As at A-levels taken at King’s College in Wimbledon, the same school attended by Joe Salisbury.

This on top of a peak junior world ranking of 12, which would doubtless have been higher had Covid not stopped the world in its tracks nine months ago.

‘I definitely want to make my hobby my job, I will do everything I can to make it in tennis,’ says Arthur, who is looking at the example of fellow US graduates in the Brit ranks, Cam Norrie and Paul Jubb.

‘With the age of breakthroughs going up there are more guys starting again to go through the college system. I want to carry on with the academic side of things but the tennis training and coaching will be of a very high standard.

‘I think a lot of making it is understanding what it takes, and so it’s useful my parents being in the sporting world. My mum played herself so she knows how the circuit works and my Dad knows a lot about professional sport.’

Tennis was always going to be his game, having been a captivated spectator at Wimbledon from a young age. He was even among the crowd for the famous match in 2010 between John Isner (himself a US college graduate) and Nicolas Mahut, which ended 70-68 in the fifth set. 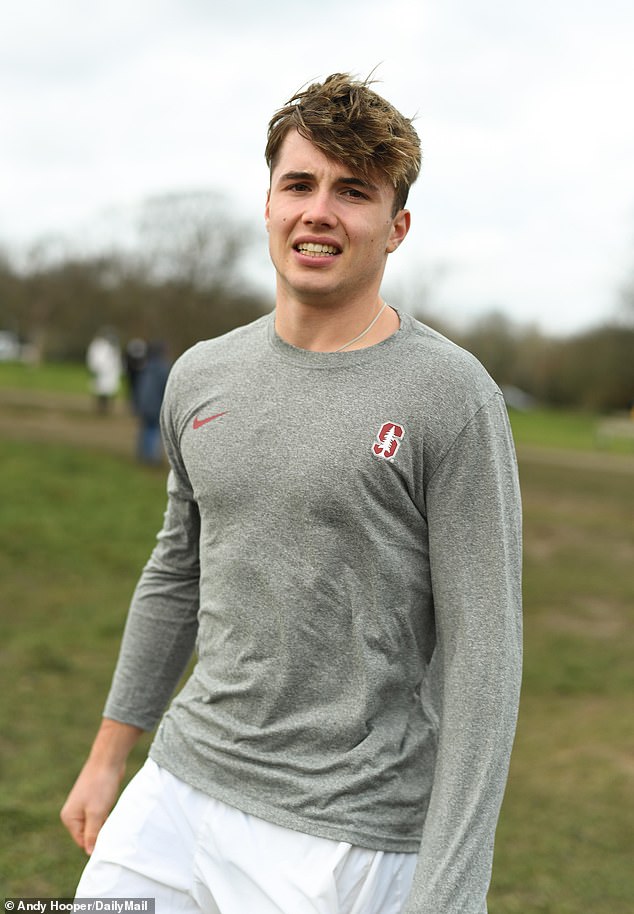 Articulate and completely bilingual, he is currently working with both an English and French coach – Craig Veal and Benoit Foucher. He made the third round at junior Wimbledon in 2019 [and Australian Open 2020] and won the biggest junior event in Russia last year before lockdown.

In November his all-court game, based on taking the ball early, saw him summoned to the 02 Arena as a sparring partner for the ATP Finals to hit with the likes of Novak Djokovic and Daniil Medvedev.

‘It was a fantastic experience, I played a lot with them. They were pretty friendly. Medvedev laughs and jokes a lot of the time around the court, Djokovic was very concentrated. What you notice most is their focus when they are hitting, they get annoyed with themselves for making the slightest mistake, it’s that sense of perfectionism.’

While his trajectory suggests he has a genuine shot at a professional career, there are no illusions in the Fery family about how hard it is to make it in an individual game played all over the globe.

Loic has already experienced plenty of professional sport’s slings and arrows in his eleven-year ownership of Lorient. They were relegated three seasons ago from France’s top flight but regained promotion last year after winning the Ligue 2 title.

Part of his football education came through the crossover of knowing former Sunderland owner Ellis Short, whose son has played serious junior tennis and is a near contemporary of Arthur. Arsene Wenger is also an acquaintance. 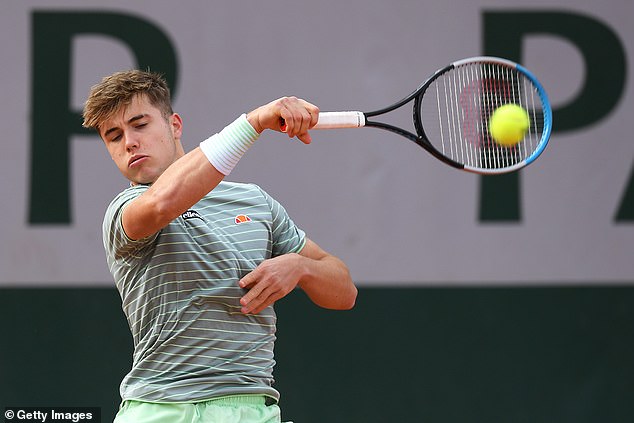 ‘It was very tough for me when we went down three years ago,’ says Loic, who grew up in Nancy and set up his investment fund business at 33. ‘ Actually I learned from Ellis, seeing everything that he went through with Sunderland and those misadventures. His son played some tennis with Arthur so I got to know him.

‘I grew up playing tennis, it was my sport, I was playing regional level competitions until I was 16. I wasn’t playing to the level of my wife or Arthur but I am competitive in everything I do. I’ve always very much enjoyed playing football as well.

‘I looked at investing in Sheffield Wednesday and also Leeds United, and got as far as making an on-site visit

But I thought Lorient was better value from the point of developing a business and it has been a good story so far. When I took over the club, it was in a bad financial situation with negative equity but we have been able to balance the books over the past 11 seasons.

‘The French league is a stressed environment right now, our TV rights holders are pretty much bankrupt. The value of the French League remains in the fact that it produces the most players featuring in Champions’ League teams, right after Brazil.’

While France has a constant stream of high class tennis talent, its output of outstanding footballers has indeed been remarkable. Both would be the envy of the UK. 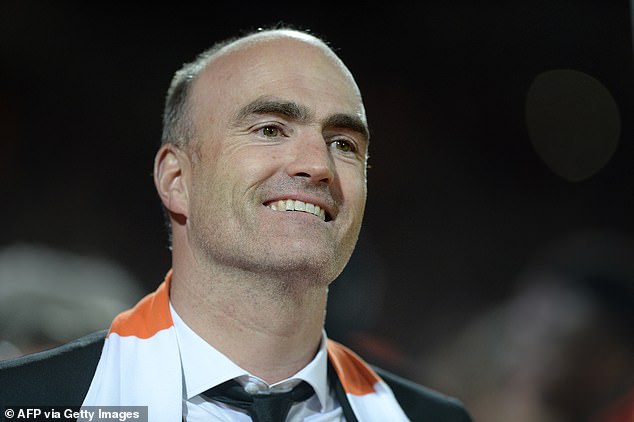 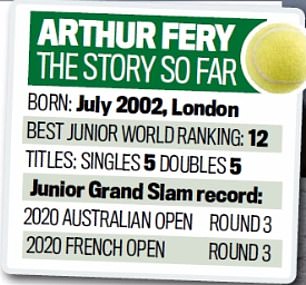 ‘I think there are two main reasons There is a very strong network of amateur football clubs across France who are well funded. And for many years we have had a system of very good academies at the professional clubs.

‘The first thing I did when I took over at Lorient was to overhaul the academy, it wasn’t good enough and I thought I wouldn’t have put one of my own children in it.’

The experiences of he and his wife led them to resist the temptation to hothouse Arthur in tennis, even after he showed immediate promise when starting to play with his parents aged five.

Hence there should be more potential to be mined from their offspring, who also made the Australian Open junior doubles semi-finals last year. Academic commitment has meant spending less time on court than many of his contemporaries.

‘There’s often this push from coaches and federations to make children concentrate very early on the sport, as if you are trying to make them a superstar at eleven or twelve. But we have always thought education was key and that Arthur could become a strong player while also achieving academic success.’

The road to glory at Wimbledon is a long and winding one. If Arthur completes it will it be as British player? ‘Arthur has always played for GB, we have been here twenty years and we feel at ease in the UK but this will eventually be his choice.’