Nick Kyrgios refused to play for several minutes after receiving a time violation during his 6-2, 7-6 win over fellow Australian Harry Bourchier in an Australian Open warm-up event in Melbourne.

Kyrgios fought off three set points in the second-set tiebreak before finally defeating world No 303 Bourchier in an entertaining clash on Wednesday.

The biggest talking point came with the scores locked at 5-5 in the second set when Kyrgios was called for a time violation on his serve. 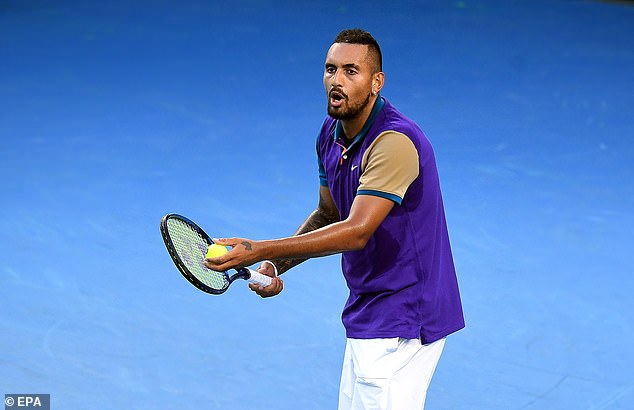 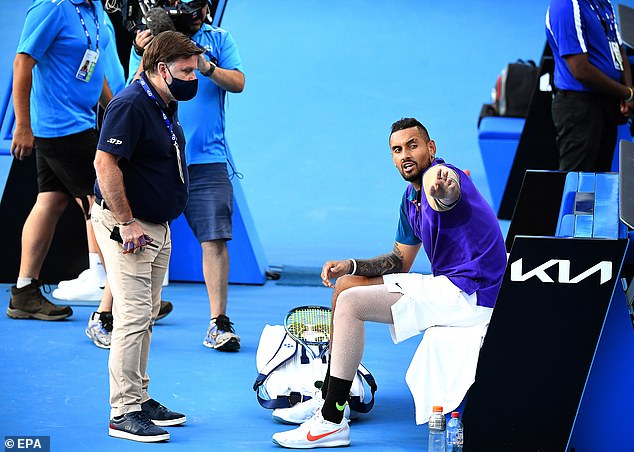 The issue had been brewing all match, with Kyrgios venting his anger at the chair umpire for repeatedly hurrying him whenever he walked back to grab a towel to wipe off sweat.

Kyrgios immediately refused to continue to play when he was called for the time violation late in the second set, with the world No 47 demanding to speak to the match supervisor.

Kyrgios argued he had already started his serving motion when the serving clock struck zero.

The 25-year-old didn’t hold back when the supervisor arrived, labelling the chair umpire a ‘smart a***’. 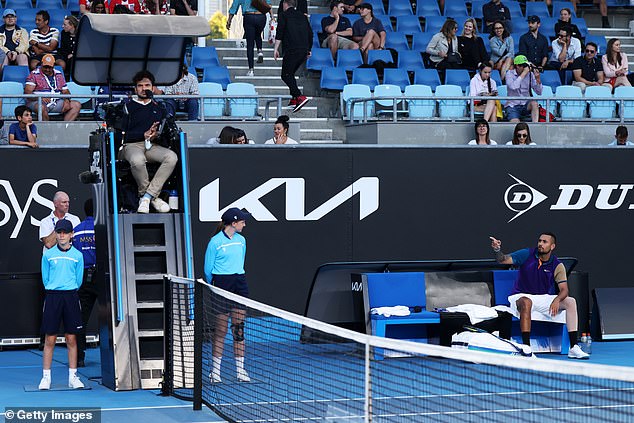 ‘Tennis is not about the umpires,’ Kyrgios said. ‘He’s an extra to make sure all this s*** goes smoothly.

‘I was in the motion of serving. Every technique is different. I wasn’t bouncing the ball.’

Kyrgios only agreed to continue playing when the supervisor assured him he wouldn’t be fined.

Kyrgios held his nerve to secure the win in 85 minutes, setting up a third-round clash with world No 25 Borna Coric at the Murray River Open.

‘I just like playing by the rules,’ Kyrgios said in his on-court interview after the match when asked about the time-code violation incident. 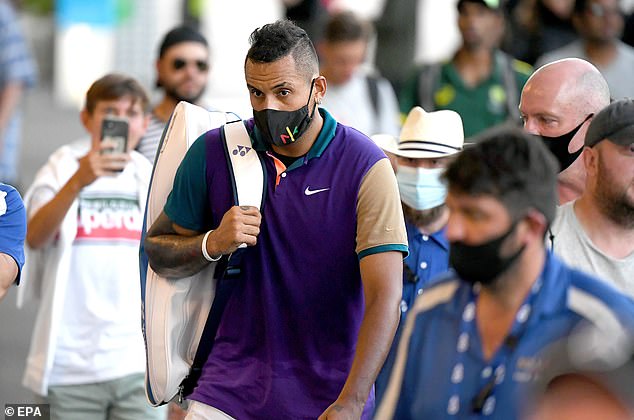 ‘I didn’t want to play until I made sure I wasn’t going to get fined, because the ATP does me pretty rough all the time, they fine me too much money.’

When asked whether he thought he was in the service action when the time violation was called, Kyrgios was blunt.

‘Yeah obviously, that’s why I stopped,’ he said.

Kyrgios produced his wide array of tricks during the match, including underarm serves and shots between the legs. He was bothered at times early by his heavily-strapped left leg, but it didn’t seem to affect him as the contest wore on.