The stars are feeling the effects of two weeks of hard quarantining upon arriving Down Under, but there were no such problems for Novak Djokovic and Serena Williams. 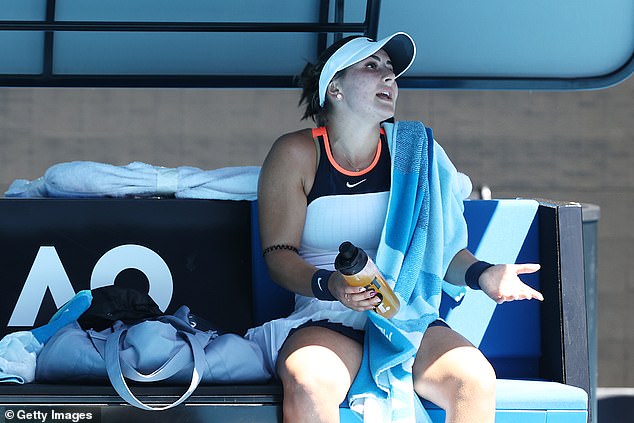 The impact of 14 days locked in a hotel room without exercise once again reared its head in Melbourne as 2019 US Open champion Bianca Andreescu became the first big-name casualty of this Australian Open.

Her opponent Su-Wei Hsieh – who at 35 years old has 15 years on the Canadian – simply took apart Andreescu, who was left scampering about at the whim of the world No 1 doubles player.

Maybe Andreescu is not a fan of 11am starts but she looked out of sorts, shuffling around like a reluctant prize fighter, slow and interested only when she realised she was about to go out.

Not that she let it get to her outwardly at a surprisingly upbeat and smiley media conference afterwards with the bigger picture front of mind. ‘The Australian government has done such a good job in containing the virus. If Australia can do it the whole world can,’ she said of the lockdown impost. Her outlook was understandable.

Andreescu has just returned from a 15-month injury layout and was saddled with the hard quarantine must-do after her coach tested positive for Covid on a flight into Australia. There are things that matter more than tennis. 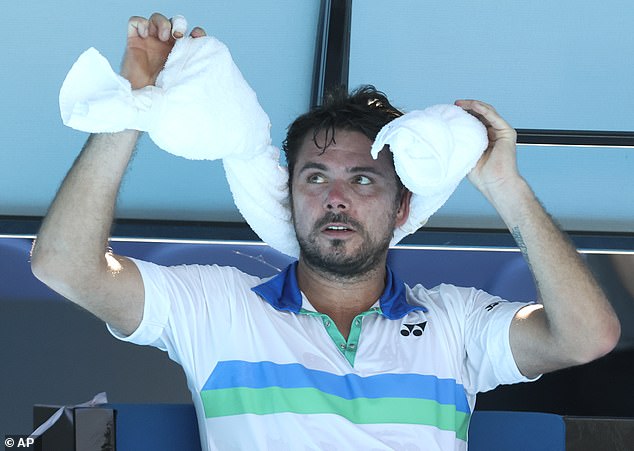 Once Andreescu, who ended the match on a doubt fault, had departed Rod Laver Arena, however, Hsieh took to the limelight. Asked by the on-court interviewer how long she might play for given her advancing years she drew great applause when she replied very politely, ‘in Asia we don’t normally say the girl’s age’.

It was a star retort from a player ranked 71 who won just one singles match in 2020.

The Hungarian, who was also taken to five sets in his first-round match, brought a partisan crowd with him that enlivened what has been a relatively quiet tournament to date. A step in the right direction for tennis, if not Wawrinka who let slip three match points in his loss.

The Swiss was joined by former Wimbledon champion and ninth seed Petra Kvitova – in arguably a bigger upset – who succumbed to Romanian veteran Sorana Cirstea on Margaret Court Arena. She refused to blame lockdown for her loss.

‘This match wasn’t really about the quarantine or practicing differently, for sure not,’ said the Czech. ‘I should have won the first set and it would be a different story.’

Following on JCA, came another high-profile casualty with seven-time Grand Slam winner Venus Williams injuring her right foot as she slipped at 5-1 down in there first set to Italy’s Sara Errani.

Williams screamed in pain and limped about before two medical time outs (on her right foot and already taped up left knee) ensued. She carried on for one game but was unable to move much beyond the baseline. A cheeky drop shot from four points after the resumption by Errani can’t have helped but a distraught Williams continued on to complete the match, losing 6-1, 6-0. 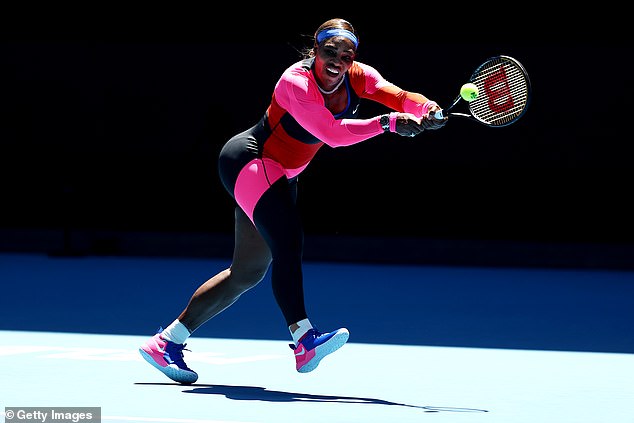 Serena Williams couldn’t stop talking in her post match media chat where subjects broached included Jesus and actor Robert Downey Jnr (past and present people she’d most like to meet) and her top three favourite tennis outfits of all time.

Williams wore the same striking catsuit – which unsurprisingly made the top three – that dazzled on day one and which looked like it could get quite uncomfortable in 30 degree heat.

But the material in the Florence Joyner Griffith tribute creation is breathable and perforated she said, so all good. ‘It’s actually super light and to a point where I need to make sure I’m wearing underwear,’ she said.

The heat was not an issue – this was a second successive hot and sunny day – either for the 39-year-old. ‘The conditions were fine, I live in Florida.’

The brightness of Rod Laver Arena (RLA) was more of an problem she said and the choice of outfit by her opponent Nina Stojanovic would not have helped as the Serb shimmered in head to toe pink.

Intriguingly, Williams revealed she was aware of the particular time of day when the sun is an issue on RLA (answer: about 12.30pm). Great players miss nothing, organisers take note. 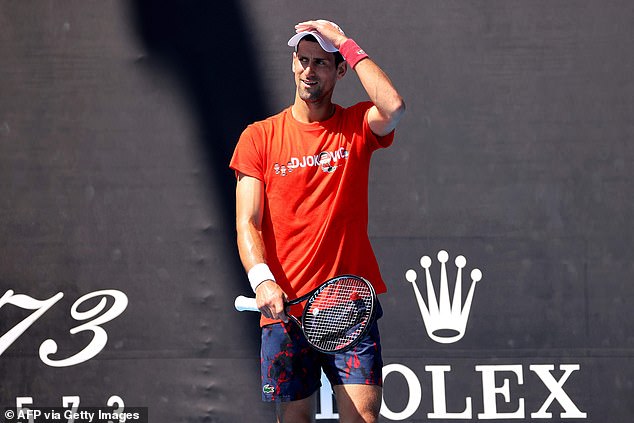 TV cameras were out in force, but spectators were thin on the ground for Novak Djokovic

It seems that whoever is in charge of policing Melbourne Park values Novak Djokovic higher than the winner of 20 Grand Slam titles and enormous crowd favourite Down Under, Rafael Nadal.

Djokovic turned out to practice on Court 11 at 11.30am and had five armed policeman watching over his court, against a mere four for the Spanish legend’s pre-match session on Tuesday.

Court 11 is the place to go and see the big names hit but either the public is yet to catch on or interest is wavering in the eight-time AO champion Djokovic.

The TV cameras were out in force but spectators were thin on the ground. Not that the joker was perturbed during a casual hit against two partners which was overseen by 2001 Wimbledon champion, and fellow Balkan icon, Goran Ivanisevic.

Ever the showman though, Novak even managed to sing to himself during a brief break, something Nadal, who is as single minded in practice as he is when it counts, is unlikely to ever do.

Doubles still has its pull 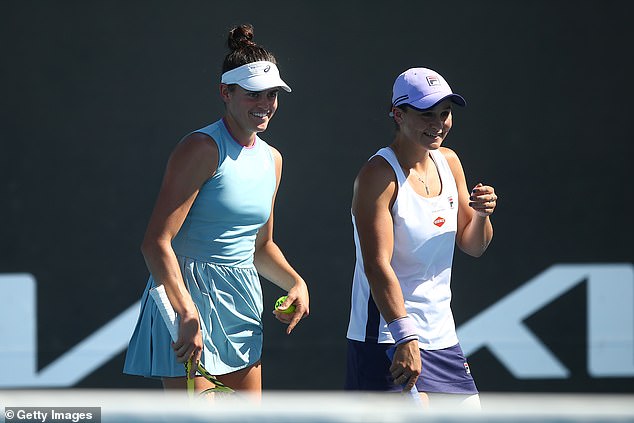 Doubles may not have the cachet or cash of the singles competition but do not underestimate its pull for the players. It is a chance for fans unable to afford a show court ticket to see the big names in action, albeit just a handful turned out for defending singles champ Sofia Kenin’s 11am kick-off on court 7.

The American, who was off form in her opener, seemed to enjoy pairing up with Switzerland’s Belinda Bencic despite going out on a super tiebreak. Kenin, who rarely strays beyond the baseline in singles, looked wobbly at the net but will have appreciated her chance to sharpen her game.

Meanwhile world No 1 singles player Ash Barty, who has a doubles ranking of 15, was shuttled out to court 13 in tandem with American Jennifer Brady. The quality of play was leagues higher and talk of a double would not be misplaced for Barty, who won in straight sets.

Also buying into doubles was 16-year-old American prodigy Coco Gauff (who as an aside is blessed with the wow factor and is already as impressive an interviewee as almost any player out there) teaming up with teenage compatriot Caty McNally way out on court 16.

Hardly any spectators were there to see the teens prevail in two sets but it is very much a spot for star watching with Stefanos Tsitsipas – who never goes anywhere without an accompanying, vocal Greek support – following her at the most remote outpost at Melbourne Park.

And playing alongside the contender for this year’s singles crown was younger brother Petros, just 20 years old and with a world singles ranking of 961. 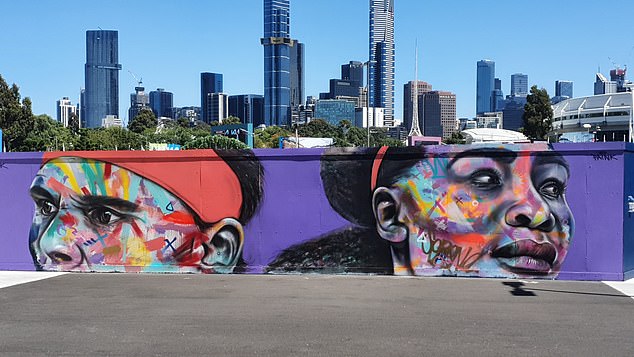 The work of local artist Paink, the colourful and impressive pieces of artwork are an antidote to the many signs around the tennis hub reminding patrons to take all precautionary measures against Covid when onsite.

The tone of the slogans is upbeat with most people sticking to the advice. ‘Be a sport, wear a mask’ is everywhere as is ‘Be an ace, cover your face’ and ‘You know the drill sign in before entry’.

It’s not the only security measure around. There is too an app that everyone entering Melbourne Park has to sign digitally to confirm their good health. Onerous maybe but a pointer nonetheless to Australia’s highly successful battle against Covid to date.