Italian duo Fabio Fognini and Salvatore Caruso were embroiled in a bitter post-match feud on court after their enthralling second round encounter at the Australian Open had gone right down to the wire.

In what was one of the most entertaining games of the tournament so far, Fognini beat his fellow countryman Caruso across five sets, winning 4-6, 6-2, 2-6, 6-3, 7-6. And the match went out with a bang – the final set was clinched by a gruelling 26-point tie break which Fognini claimed 14-12.

But after meeting at the net, Fognini taunted his losing opponent by claiming he had been ‘f***ing lucky’ throughout their match and said Caruso won ‘four identical points’. 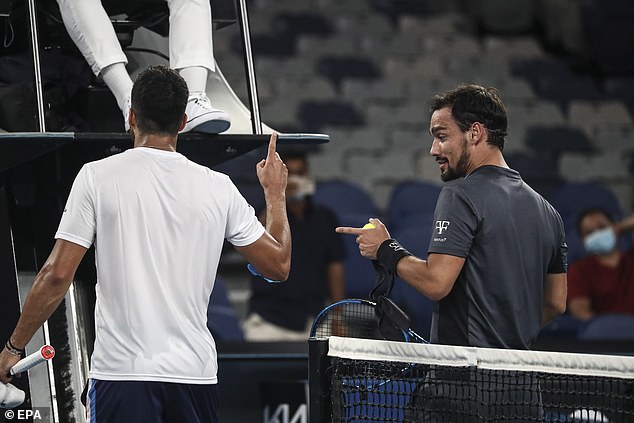 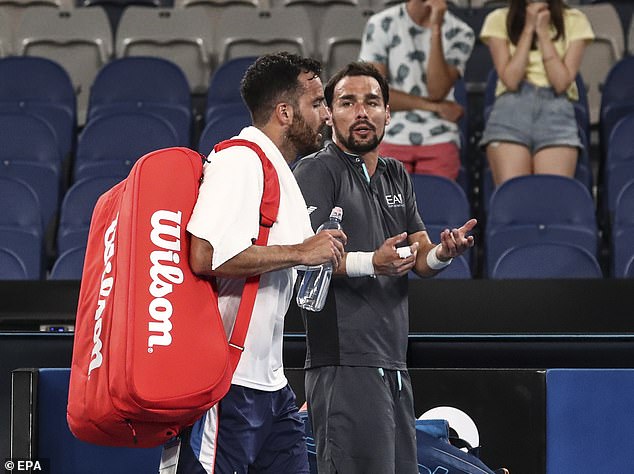 Despite ending up being defeated, Fognini told Caruso he was ‘f***ing lucky’ on certain points

The exchange went on and on and in the end, they had to be split up before leaving the court.

Sicilian Caruso did his best not to rise to Fognini’s ‘lucky’ claims and seemed taken aback at what his opponent was saying.

‘I didn’t dare to say a single word in the whole match,’ Caruso said. ‘You can do whatever you want.

‘I didn’t attack you. I’m telling you it’s not the way to behave because I didn’t tell you a single word. Let’s say I didn’t expect that from you.’

Fognini repeated his ‘lucky’ jibe, saying to Caruso: ‘ Can’t I say you have been f***ing lucky? What’s the problem? 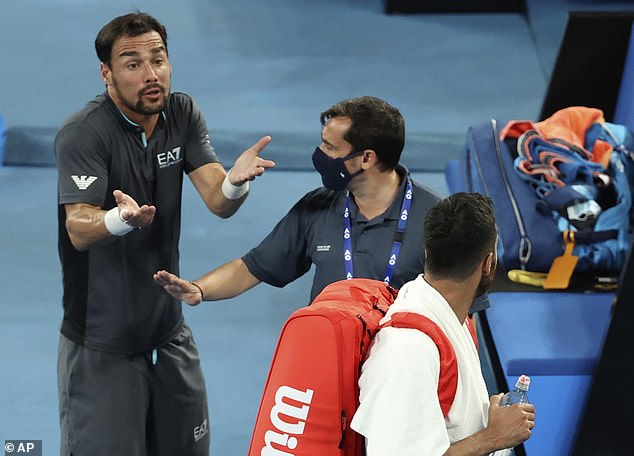 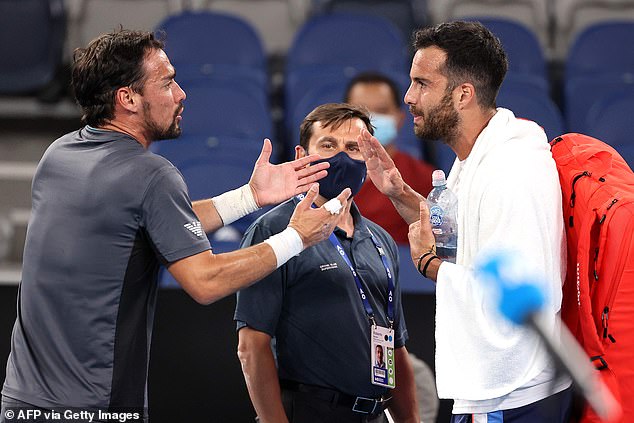 The duo were arguing in in Italian, meaning the onlooking crowd who were applauding both players off the court were unaware of the profanities that were being exchanged.

It is the second year in a row that Fognini has been involved in controversy after a long match at Melbourne Park.

Fognini ripped his shirt off in protest and was docked a point for refusing to play during an ill-tempered fourth round loss to Tenys Sandgren that the American described as a ‘war’.

But it is the 33-year-old Fognini who will have the last laugh as he recovers from a gruelling five-setter.

The 16th seed, a clay court specialist, advances into the third round and will play one of the home favourites in Alex de Minaur, who is the 21st seed. 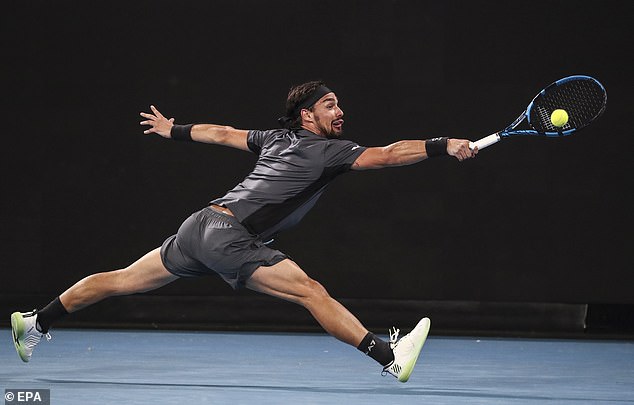 Fognini: You have been f***ing lucky, you should apologise. I didn’t disrespect you until now

Caruso: What are you talking about?!

C: What are you talking about?!

C: I didn’t dare to say a single word in the whole match

F: I said something because you called for it

C: I didn’t dare to say a single word in the whole match, enough now

C: You can do whatever you want…

F: So why are you f***ing break my balls now? I said you have been f^^king lucky, if I’m wrong saying it. I’m wrong, don’t attack me

C: I didn’t attack you. I’m telling you it’s not the way to behave cause I didn’t tell you a single word. Let’s say, I didn’t expect it from you

F: What did you not expect? I told you have been f^^king lucky, you didn’t like it, what should I say?

F: Why? What’s the problem?