Jamie George has just finished a half-hour stint on the golf simulator within England’s Six Nations bubble and is ready to take a swing at a variety of topics.

Dialling in from the Lensbury club in Teddington the amiable hooker has lots to get off his sizeable chest.

Owen Farrell, Maro Itoje, the pain and suffering of Saracens’ salary cap saga, hatred, criticism and attempts to heave England’s championship and his club’s season back onto the rails are all on the agenda. 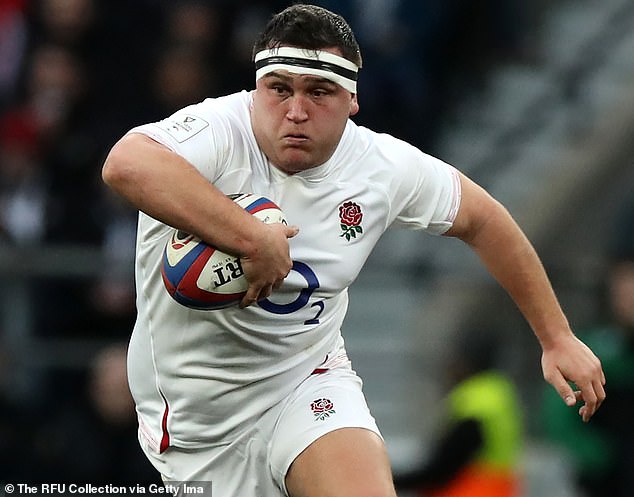 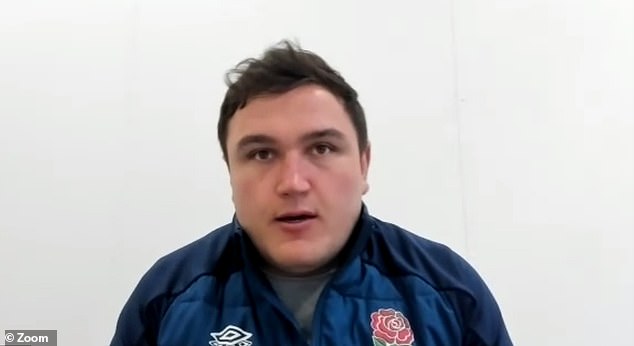 George is by no means angry, but as ever is passionate, mixing light-hearted conversation with heart-felt discussions, happy to delve into the details of it all.

First Farrell, then. The England captain has – by the admission of Eddie Jones – been poor. He has been roundly criticised, called to be dropped and stood-down as skipper this tournament.

Those that know him find it extraordinary he is ever questioned. So how does Farrell inspire that reaction?

‘I don’t think I’ve ever played with anyone who has such an influence on the people around him,’ explains George.

‘I’ve played with Owen since I was 14 and I’ve never once worried about him.

‘Where he has missed 10 kicks at goal, I’m extremely confident he’s going to make the next one.

‘He’s someone I respect more than most. 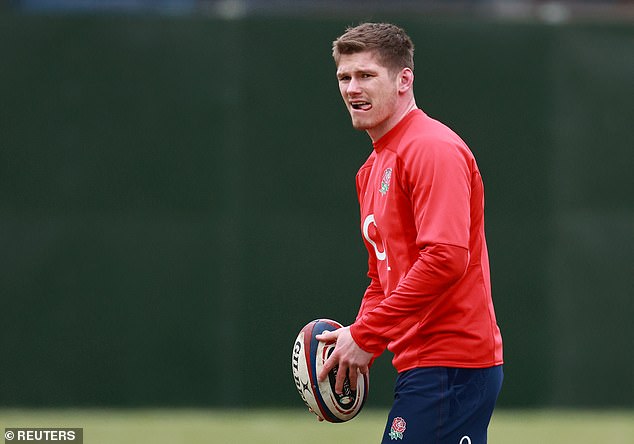 George discussed skipper Owen Farrell, saying ‘he’s someone I respect more than most’

‘You know he’s putting in the work, will always be there and will always front up. And when pressure comes, he seems to thrive.’

Saracens have a ‘philosophy club’ set up by their psychologist David Jones and former players Neil de Kock and Chris Wyles.

On one lockdown Zoom call last year they discussed The Last Dance, the Chicago Bulls documentary – all coming to the same conclusion. 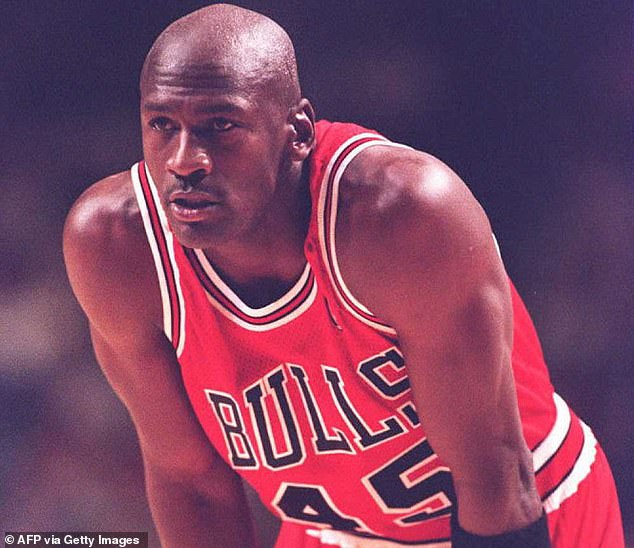 ‘He would probably hate me for saying this, but there were huge parallels between him and Michael Jordan, his drive, his work-rate, how much he brings people with him.

‘He does hold a bit of a grudge at times. You can see it in the way he plays. I’ve heard him say that. And he remembers stuff.

‘No one in the England team is worrying about Owen.’ 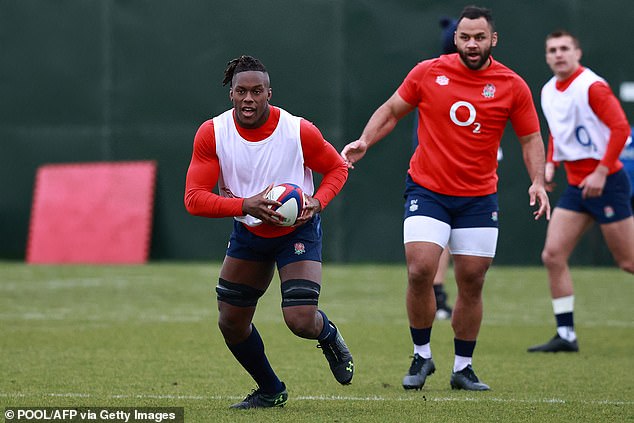 ‘He has grown into this unbelievable leader here, and at Saracens,’ George said of Maro Itoje

If Farrell is Jordan, then what about Maro Itoje?

‘Scotty Pippen maybe but I’m not giving him that!’ laughs George.

‘My earliest memory of Maro was driving into the training ground at seven o’clock in the morning, he was two months out of school and was the first one on the pitch, catching high balls.

’10 years later he’s the first one out, catching high balls.

‘The inner drive in Maro is something you can only respect. His want to win and get better is just huge.

‘He has grown into this unbelievable leader here, and at Saracens, and has matured massively. 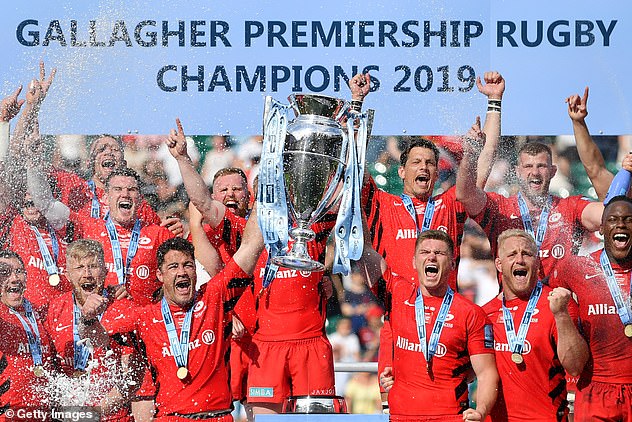 30 STARTS for England, more now than appearances off the bench (27).

George’s first 17 Tests all came as a substitute, but he has now started under Eddie Jones more than Dylan Hartley did when with the Australian (28 times).

‘When people question people like that it almost makes you laugh.

‘It’s funny how six months ago Maro could have been the best player in the world and now people are saying he’s not. He won’t be bothered by that.’

If England’s two top players are in the cross-hairs, it is a continuation of a theme.

Two years ago last week that bombshell Sportsmail investigation dropped, beginning the process of exposing Saracens for ‘flagrant’ salary cap breaches, their record fine, relegation and spectacular fall. Farrell, Itoje and George have been at the centre of it all.

The hooker is not railing against all those decisions – in fact apologetic and remorseful – but is here to explain that the barrage of negativity, whether fair or wildly vitriolic, has laid a heavy burden upon him and his friends.

‘It’s probably the first time in my career I was involved in negativity from outside,’ proffers the 30-year-old who sat in on crisis board meetings, was a link between the players and former chairman Nigel Wray and an emotional first port-of-call for many who struggled.

‘People are entitled to their opinions. We got some stuff hugely wrong.

‘Some people look at players as just assets, as things, rather than people.

‘The hardest thing was hearing ex-players, or current players you’ve played with, get on with, having their say. That hurt the most as they know us as people and human beings, as friends.

‘With lockdown being so difficult for so many people, there is a lot of negativity flying around and that often gets passed onto higher profile people on social media. 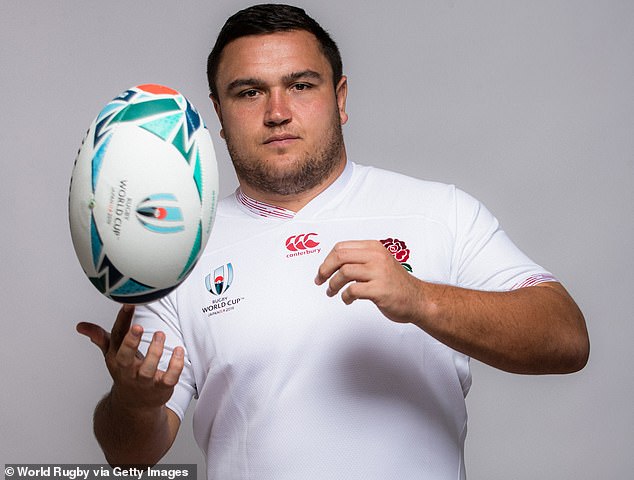 ‘Having been a part of it myself that has been tough. I’d encourage people to remember that people are human, have suffered a huge amount for what we’ve done.

‘We’re sorry for everything we did and we’re paying our price.

‘I’m not saying you’re not allowed to hate us, but maybe show less hatred. We don’t need to hear about your hatred so much.’

‘Really not expecting it, and that’s not taking anything away from Cornish Pirates, but I was hugely confident.

‘It’s put a bit of a spanner in the works, hasn’t it? We were gutted for the boys, because we know they’ll know they let themselves down. 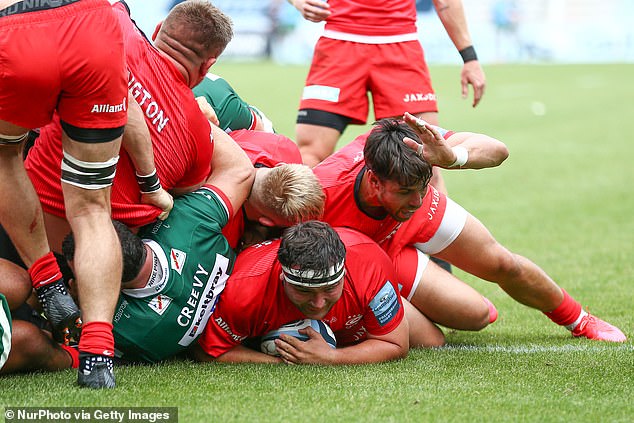 ‘I’m the worst watcher! My wife had to leave, she took the dog out, and the dog was shattered by the end of the day because I then needed to go out afterwards!

‘It might mean playing a few more games when we get back.

‘The thing we have shown throughout all this is we have character, we are resilient, we’ll dig and we don’t often put two bad performances on the bounce.’

George is a people person. The first lockdown brought him further into the business world, expanding his physio business in Hertford, with a second branch now opening in Radlett.

He was so glad to have been able to host 15 close friends and family at his wedding to Katie in December, the last weekend that was possible before another lockdown.

At the ceremony Elliot Daly was a fine best man. ‘He was quite nervous about the speech but nailed it,’ adds George.

‘If you need a hype-man or anyone to bring energy – we had a few people that didn’t know each other – you throw Elliot and his fiancee in and they’re absolute gold dust.’

George is already booked up to play golf with Katie’s brother and father when courses open on March 29. 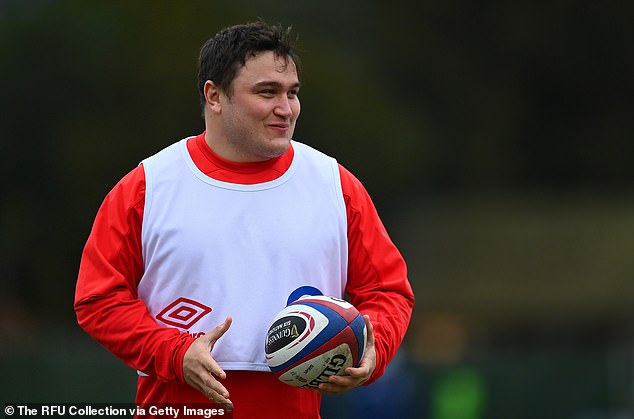 His semi-retired parents – Ian and Jane – are struggling missing out on supporting their son, usually always the first to travel.

‘In the nicest possible way my rugby almost shapes how they live their life in a way,’ he says.

‘But there’s light at the end of the tunnel.’

Once again there will be no noise at Twickenham when France come this Saturday – but the deafening cacophony still rages around England.

‘People realise it’s a big game and we’re going to need to be at our best,’ George concludes.

‘The message is not getting distracted by things from outside. We can’t get bogged down with the negativity around the team.

‘At times like this, it puts an edge on our togetherness and how tight we can be.

‘All this has allowed us to have interesting, challenging and difficult conversations that have put us in a better place.

‘I feel like I’ve come out the other side a much more mature, experienced player and person.’

Like most George cannot wait for life and his rugby to return to the normal swing of things.