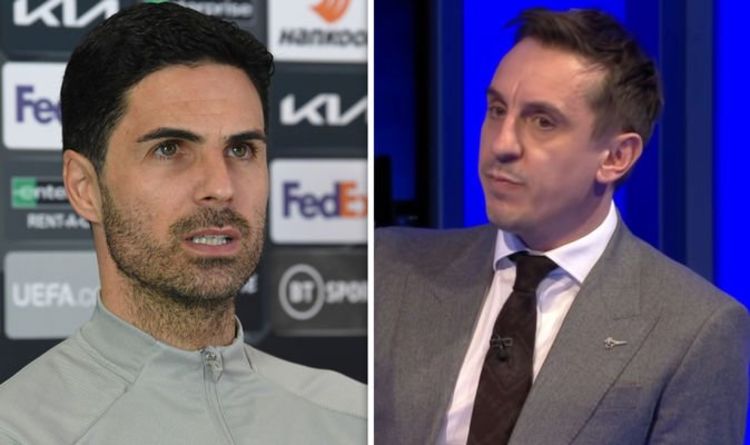 Arsenal boss Mikel Arteta says criticism of his team was “fully deserved” after the 3-0 loss to Liverpool on Saturday. The Gunners were blown away by Liverpool in the second half of the Premier League clash at the Emirates. Two goals from Diogo Jota and one from Mohamed Salah condemned Arsenal to a 12th league defeat of the season.

Speaking on Monday Night Football 48 hours later, the pundit tore into Arteta’s side.

Neville said he was “uncomfortable” with the performance of the Arsenal players and said some of them formed a “little mafia” who weren’t prepared to do what the manager asked.

“I was alarmed,” Neville said on Monday.

“Ordinarily on a Monday Night Football you come into this, you plan what you’re going to do and we know Arsenal are inconsistent, we know where Arsenal are in their transition under Mikel Arteta.

“I was really uncomfortable with what I saw. There have been a number of times in the past few years where we’ve been doing Monday Night Football that my anger has sort of emerged and grown over the couple of days since the game.

“It happens very rarely. I remember QPR, in the early days of Monday Night Football, had a team I really didn’t like. I think it was Sunderland once where I thought, ‘there’s something not right there’, there are a couple of Chelsea performances where I thought they were turning on the manager at a certain point.

“I have to say, coming out of Saturday, we don’t know what goes on behind the scenes at Arsenal but there were a few of those players on the front part of the pitch, it looked like a little mafia.

“It looked like a little group of players who weren’t comfortable like there was a disconnect between them and the manager.”

On Wednesday, Arteta spoke to the media for the first time since Neville’s comments ahead of the Europa League quarter-final first leg against Slavia Prague on Thursday.

And the Spaniard insisted his team must take the comments on board because they were deserved.

Arteta said: “No response. When there is criticism after the way we played against Liverpool, we have to take it on the chin because it’s fully deserved.