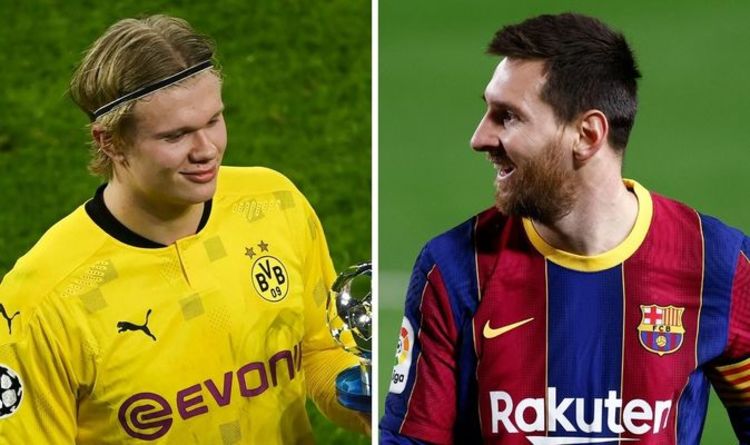 Barcelona’s potential starting XI next season suggests things are finally on the up for the Catalan giants but Lionel Messi’s future could make or break their transfer window. The board are still waiting for an answer from their forward, who is now in the final few months of his current deal at the Camp Nou.

Manchester City and Paris Saint-Germain are watching on closely but Barca remain optimistic they can convince Messi to stay.

It’s the second campaign new president Joan Laporta will be facing as he fights to keep the club’s most prized asset.

Laporta is well aware that a handful of new signings could convince Messi to stay, particularly if they need the season strongly with silverware.

The gap on Atletico Madrid has already been closed at the top of the table, while the Copa del Rey is still up for grabs.

In midfield, there could be a change of shape to 4-2-3-1 with young star Pedri unfortunate to miss out with Sergio Busquets.

Frenkie De Jong could be partnered with his international colleague Gini Wijnaldum, who looks set to join on a free transfer.

In front of them, the forward line is frightening. Ousmane Dembele, who looks set to sign a new deal after hitting form, starts from the left.

There is no room for Antoine Griezmann or Philippe Coutinho though, both will be sold should the price be right this summer.

Memphis Depay comes in to play as the No 10 with Messi then starting off the right, a role he has played for the majority of his Barcelona career.

Erling Haaland could end up leading the line after Barcelona entered the race for the Norwegian frontman.

Mino Raiola and Alf-Inge Haaland were in Catalonia for talks last week and Barca are firmly in contention to sign the Borussia Dortmund man, who is valued at around £150million.

It won’t be easy to win the race given that price tag is virtually unaffordable in a market hampered by the pandemic but Barcelona will at least try. Their potential XI next season, looks frightening.