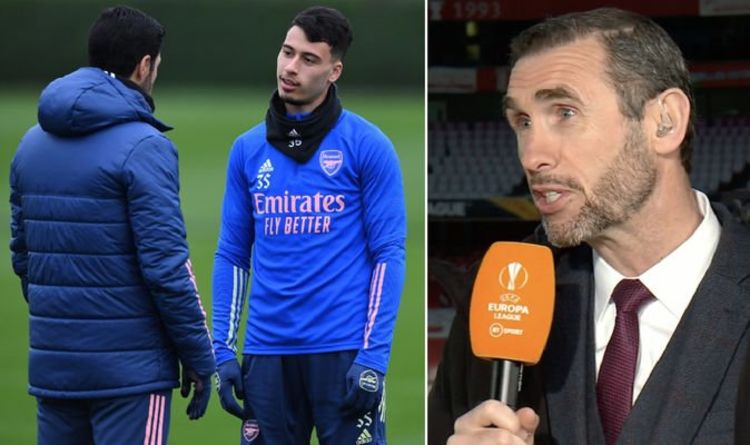 Arsenal legend Martin Keown cannot understand why Gabriel Martinelli is not getting more minutes under Mikel Arteta this season.

The 19-year-old started on the substitutes’ bench in the Europa League quarter-final first-leg against Slavia Prague at the Emirates on Thursday night, replacing Willian after 73 minutes as Arsenal drew 1-1 after Tomas Holes cancelled out substitute Nicolas Pepe’s strike.

Martinelli has made just five first-team starts all season across all competitions and none since the goalless Premier League draw against Manchester United on January 31.

The Brazilian was hauled off at half-time of that match and since has played just 21 minutes of football across nine top-flight games, being an unused substitute six times and missing out on the squad entirely against Tottenham.

The left-footed teenager scored 10 goals and laid on four assists in 26 matches in his debut season for the north Londoners but despite overcoming a knee injury has only made 12 appearances this term, returning one assist.

And iconic former centre-back Keown insists Arteta’s treatment of the South American teenager is “frustrating”, insisting he feels the exciting Martinelli is worthy of more opportunities.

Keown told BT Sport: “I’d like to have seen Martinelli in there. He’s a player who keeps getting overlooked. It’s so frustrating.

“[Bukayo] Saka has been named in the last two England teams, once as a full-back and once as a forward. That’s how good he is, he’s a real utility player but with quality.

Looking back at a clip of Martinelli scoring an excellent solo goal against Chelsea at Stamford Bridge last season, Martinelli continued: “Actually, in that Chelsea game, I’m going to pick a fight with Arteta because he was about to take him off in that game and then he stayed on and did that.

“I’d like to see more of him. I’m going to start a campaign to get Martinelli in the team. Martinelli, if you see how well the youngsters have done, get another one in there as well.”

Former Arsenal women’s winger Karen Carney added: “Is he seen as an impact player? What he has is flair. You know why the Arsenal fans love him and why myself and Martin want him in the team, is because he fights for the badge.

“His team-mates see him in training and know what he can do. They will be baffled by his continued absence. I know I am.

“Use him on the left. Use Bukayo Saka on the right. Start Emile Smith Rowe. Then you’ll have a team who can pose problems for the opposition. There were too many passengers against Liverpool.”

Arteta meanwhile said of Martinelli back in February: “He wants to play all the time. We know him and he is disappointed when he is not playing.

“But you know that when you throw him on that pitch he is going to do his best. He had his opportunity last week against Benfica when I decided to substitute Aubameyang and give him some minutes.

“He needs to take his opportunity and if he plays, he needs to perform like everybody else.”