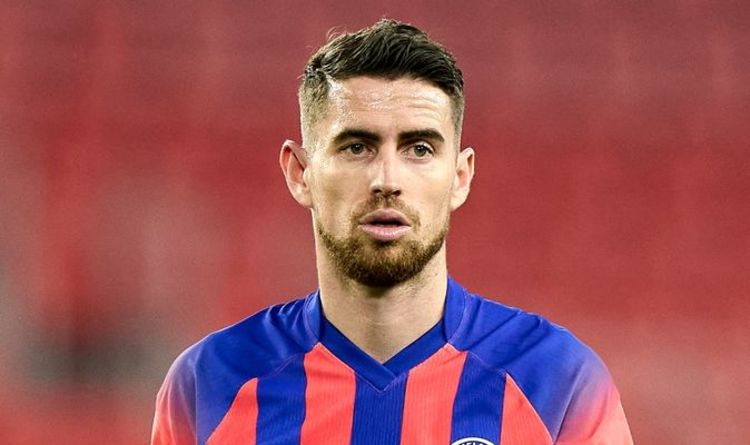 Chelsea midfielder Jorginho has once again refused to close the door on a summer return to Napoli after helping the Blues to victory over Porto in Wednesday evening’s Champions League quarter-final first-leg clash. The 29-year-old fed Mason Mount with a delightful pass for Chelsea’s opening goal of the match before defender Ben Chilwell doubled his side’s lead in the dying seconds.

The result will see Thomas Tuchel’s men carry two crucial away goals into the return leg on Tuesday, with the west London club likely to reach the last four of the competition unless Porto can pull off a monumental upset.

Jorginho has established himself as an important member of the side since Tuchel’s arrival, cementing a solid partnership with Mateo Kovacic in the middle of the park.

He played a bit-part role under former boss Frank Lampard but has been trusted by the German manager to excel in his deep-lying position ahead of the back four on a consistent basis.

The Italy international was undoubtedly off the pace for the visit of West Bromwich Albion, who secured a memorable 5-2 win away from home on Saturday afternoon, but redeemed himself with a stellar performance against Porto to remind critics of his importance to Chelsea’s game.

Despite his impressive campaign so far, Jorginho has been at the centre of a transfer whirlwind regarding his immediate future in recent weeks.

He has repeatedly suggested that he would be open to a move back to Napoli, the club he flourished at before Chelsea signed him in the summer of 2018 for a fee in the region of £51million.

The midfielder followed Maurizio Sarri to Stamford Bridge and has played 128 times for the club since penning a five-year deal in the capital, but appears to be angling for a return to his country of birth.

Jorginho did little to ease the speculation after the final whistle against Porto, admitting that he would like to play for Napoli again before the end of his career.

“When you live in Naples you can never forget,” he told Sky Sport Italy. “I had a wonderful experience and I am very fond of the city and the fans.

“Now, honestly I’m not thinking about it because my concentration is all on Chelsea. But if there is the possibility, one day you don’t know when, to return, of course I’d like it.”

Jorginho’s revelation follows an interview with Italian TV channel Canale21 last month in which he unsurprisingly claimed that he prefers the hot sun of Naples to the grey, rainy skies over London.

“There are no words to describe how much I miss Naples,” he said.

“Who wouldn’t miss Naples? It’s so cold in London, they don’t even know what the sun is.”

The Blues midfielder’s claims were previously contradicted by his agent Joao Santos, who stressed last month that his client would be staying in London this summer while hinting that a new contract could even be on the cards in the near future.

“He has a two-year contract with Chelsea,” Santos told Tuttomercato. “He is fascinated by taking part in the European Championships after which [his next goal will be] the World Cup in Qatar.

“He will stay at Chelsea, 100 per cent. We will discuss it [his contract] in a number of months.”