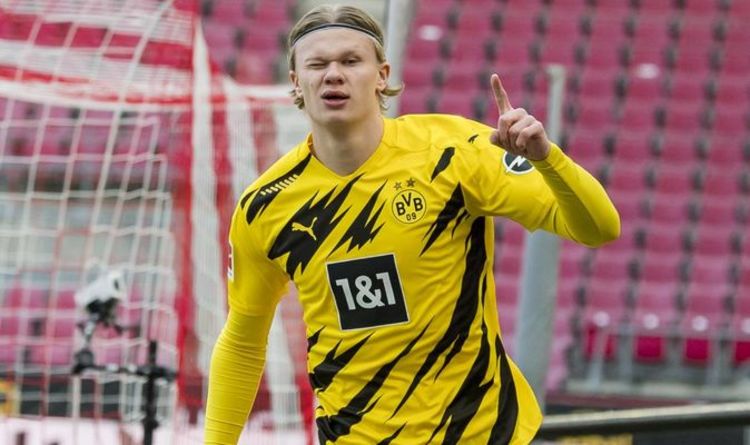 Manchester United and Chelsea may have to count the cost for Mino Raiola’s visit to Barcelona as he discussed Erling Haaland’s next club. The Borussia Dortmund striker is a top transfer target for several elite European sides.

And Raiola has got to work, jetting off around Europe to speak to clubs over where they envisage Haaland fitting in – with Barcelona the first stop.

This was no accident, with OK Diario reporting that the Dutch-Italian deliberately picked Catalonia as his initial destination to speak to Barca president Laporta.

The two have a good relationship, despite the fact that Los Cules have been hit hard financially by the Covid-19 pandemic and have little chance of landing Haaland.

But by doing so, it has driven the price up from Real Madrid – who would move heaven on earth to stop the striker arriving at the Nou Camp.

By definition, that has had a knock-on effect for United and Chelsea – who would have to match that offer from the Bernabeu to keep up.

City are another club with the resources and the means – with Sergio Aguero leaving – but The Athletic reported that they are not in the race for the Norway international.

It was further stated that officials from the Etihad believe Real Madrid are the frontrunners for Haaland’s signature.

That spells more danger for the likes of United and Chelsea, who already face a steep battle to land the youngster.

After a personal feud with Pep Guardiola, Raiola’s chances of working with City could rule them out of the race.

He said last month: “As for Mr Guardiola, I’ve closed the book already a long time ago. Everybody knows what I think of him personally and he can say what he thinks for me personally.”