Talk about a good week to bury bad news – or, in this case, a meaningless Six Nations debrief.

While football’s European Super League scandal raged, the RFU slipped out their review of the miserably poor Six Nations campaign in which England, for the second time in four years, finished fifth.

To quote the RFU: ‘The debrief panel included RFU board members, executives and independent experts. The review was informed by feedback from players, coaches (past and present) and support staff as well as detailed presentations from Eddie Jones.’ 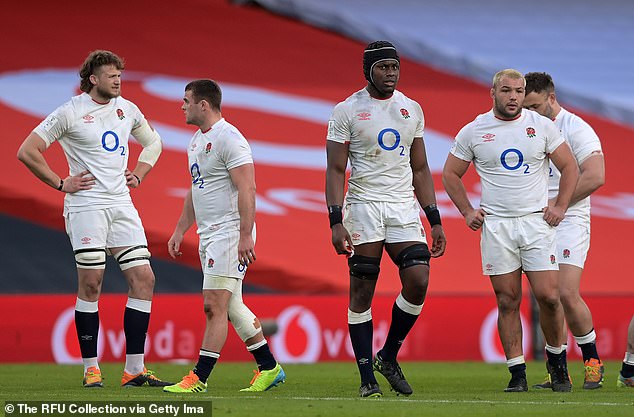 Firstly, note that not one person is willing to have their name attached to this review. That is scandalous. We need to know the identity and qualifications of those at the RFU passing judgment and assessing a man who has twice taken sides to the World Cup final and was also involved in South Africa’s 2007 triumph.

Eddie remaining as coach was a given – and rightly so.

That said, the RFU also announced that an anonymous panel of rugby experts would be assembled to ‘inform all future debriefs to provide additional insight and support for the head coach. These external advisors will also be utilised after each campaign to provide regular reviews and support for the coaching strategy for future Six Nations campaigns and in the build-up to Rugby World Cup 2023’.

The more I think about this, the more bizarre it seems. He might not be in a position of strength after recent results but I am absolutely staggered that Jones has accepted this nonsense.

As with every panel the RFU have assembled over the last decade, I would question their qualifications. It will be hard enough to find one person with the right knowledge and character to assess and challenge a coach of Eddie’s experience, let alone a panel of them.

As I have stated many times, I do not like post-tournament reviews because they are either destructive, knee-jerk reactions or whitewashes. This one has managed to be both.

It’s a cringe-worthy exercise in box-ticking, excuse-making and corporate twaddle by those who no doubt think they could coach a team like England but have neither the talent nor the bottle.

It is so wrong that Jones will have no place to hide while those on the panel presiding over him enjoy anonymity and therefore no repercussions for their decisions.

How will anonymity even work? If their identity is protected, does this mean they will not be seen in camp? And if that is the case, how will they experience and understand the team culture, environment and dynamics?

What is needed – and no head coach would particularly like this – is a director of rugby to whom the England coach consults on an ongoing basis, not once or twice a year after a competition.

Eddie was a technical advisor to South Africa and Jake White when they won the 2007 World Cup, so it surprises me that he cannot see the merits of such a position. A line manager but also a support figure, a confidant and trusted rugby man who would tell him straight when he is getting things wrong but back him to the hilt if he sees progress.

I had Fran Cotton and while he didn’t have the official title he was a powerful board member and someone I talked to on a regular basis. He ticked every box. It would not be easy to find this person. Chemistry with the head coach is key but if you get it right, it would be a far more productive experience than a faceless panel picking over your work.

The second outcome from the debrief was publishing what can only be described as a list of excuses for England’s performance. I imagine the likes of New Zealand, France and South Africa had a good laugh reading those sorry excuses.

Let’s dig into some of the review’s fatuous findings:

Really? We are talking about England here not Maidenhead Under 11s! We had Steve Lander, a full-time referee, helping us 20 years ago. He was a key member of my backroom team, keeping abreast of new laws and interpretations, analysing the penalties we conceded, the modus operandi of upcoming refs.

This is stone age stuff. You take it as a given that it is going on — and if not, why not?

2. The use of data and analytics in high performance and campaign management is increasing and to support this approach, England Rugby will continue to work with Premiership Rugby with the objective of identifying and introducing one common data system across the pathway and elite performance game. This will be vital to monitoring and developing emerging talent in the pathway as well as being an additional tool to manage player welfare.

Data is powerful but there is way too much analysis in the English game already — and it’s often meaningless. In the wrong hands it threatens to paralyse the game.

All the data in recent years has convinced gullible coaches that it is dangerous to have the ball in hand and that the best option is to kick for territory. Look where that has taken us.

Did England really need data to see that the Sarries boys were undercooked and off the pace? World-class, hands-on coaching from Eddie downwards is what England need right now. Keep the sports scientists and performance directors at arm’s length.

I would love to know where this came from. The best sports psychologists are the coaches. That is part of your job. Part of the art of being a head coach is picking good leaders who you can normally spot a mile off. It’s not rocket science.

You identify players with leadership qualities, you give them responsibility — captain, vice-captain, lineout boss, defence leader. Get the right coach, the correct game plan, pick the right, in-form players in their best positions and life quickly becomes relatively straightforward.

4. Coaching – the absence of Jason Ryles and Neil Craig was a significant loss in coaching expertise and team support and this had a significant impact on the wider coaching team. The initial unavailability of Matt Proudfoot and isolation of Eddie Jones also had an effect on the effectiveness of the coaching team.

The buck must start and finish with the head coach. Are we really going to point the finger at Gareth Southgate’s assistants if England bomb out this summer?

England enjoyed the best part of 10 weeks together last autumn and winter, an astonishingly enviable time. And then, as usual, they gathered two weeks before the tournament. No side could have had more preparation time before a Six Nations.

Over the last 12 months every team has had considerable Covid challenges to overcome, just as millions have had in their own lives. Five-star facilities, state-of-the-art back-up. I am acutely embarrassed that England even put this forward as an excuse.

5. Player preparation and availability – several players did not have enough game time going into the Six Nations. Conversely, a wider group were fatigued as a result of being the only country to have back-to-back seasons, resulting in players having no mental break from one season to the next.

Everybody knew the situation with the Saracens contingent. The choice was simple. Are they ready or not? If not, drop them and bring in many of the great, in-form English players lighting up the Premiership.

And who exactly were these fatigued players who, remember, played no rugby at all from March to August last year. Many didn’t appear in the Premiership play-offs and played very limited rugby, or none at all, in the autumn internationals. I don’t think you will find Max Malins, Ollie Lawrence, Ben Earl, Dan Robson, Ellis Genge, Mark Wilson, Harry Randall, Paolo Odogwu and Anthony Watson complaining of rugby and fatigue. On the contrary they were straining at the leash. And if there were players complaining of mental fatigue, don’t pick them.

6. Covid – the necessary stringent protocols, in some cases greater than other Unions – had a significant impact on coaching and support staff as well as the playing squad cohesion. Squad transition – the agreed protocols, which the RFU and Eddie were fully supportive of due to Covid challenges – meant fixed squads prevented players coming in and out during the campaign as they would normally.

Again England doth protest too much. They faced the same challenges as all the other sides.

It was England, in negotiation with the Premiership clubs, who put a limit on the size of their squad. They opted for a 28-man squad, which should have been plenty given they could bring in injury replacements. Jones and England picked exactly who they wanted when they wanted. Again, this excuse sticks in the craw.

Just when English rugby was looking for the RFU and Jones to front up and take responsibility, we are served up excuses.

The reality is, England got smashed in much the same way as the World Cup final. Selection was wrong and we’ve been sleepwalking into a style of rugby that leaves us with nowhere to go.

Eddie should stay until the next World Cup because I know how good he can be. But since the World Cup semi-final he has stagnated and, unfortunately for the players and supporters, there was nobody remotely qualified at the RFU who spotted that. I hope we now see the old Eddie back at his best but let’s forget meaningless panels and sorry excuses.