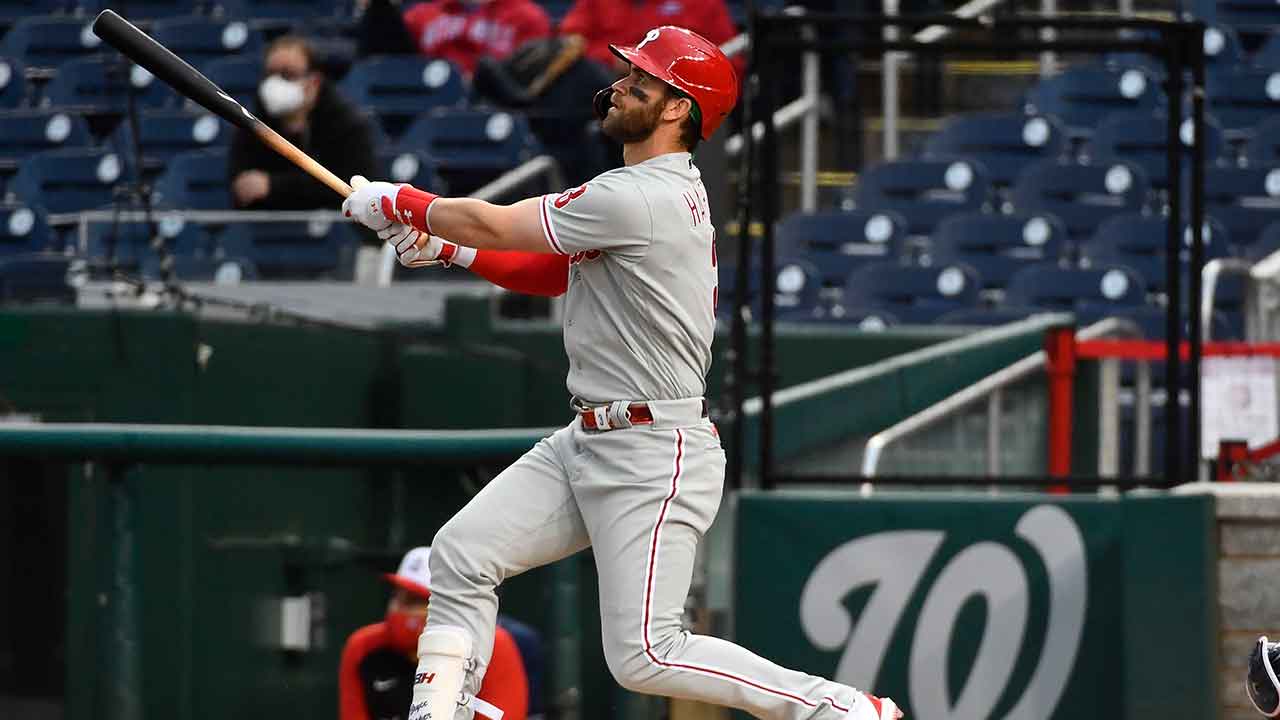 “I’m ready to go and excited to be back,” the Phillies slugger said before his first start since May 22 on Saturday afternoon.

“When I step on the field, I try to bring passion into what I do every single day. I’m excited to get out there and grind with my guys. (The ballpark is) 100-percent capacity, so I’m excited to be out there for a game and be with the fans. Hopefully, win today, win tomorrow, win the series, and we can get going.”

The Phillies need to get going. They wasted a strong start by Zack Wheeler in a 2-1 loss to the Washington Nationals on Friday night. The loss was the Phils’ 12th in their previous 17 games, dropping them four games under .500 at 26-30. They entered Saturday’s game in third place in the NL East, four games behind the first-place Mets.

Harper had been on the injured list with left forearm contusion, which was the result of his getting hit by a pitch in St. Louis on April 28. Harper was actually hit in the face with a 97-mph fastball that night. Amazingly, he suffered no facial injuries. The ball, however, caromed off his face and hit his forearm/wrist with some force. Harper missed a few days then returned May 2. He played in 15 games and hit just .211 with 26 strikeouts in 57 at-bats before shutting it down and eventually going on the 10-day injured list.

“It really just wasn’t feeling right when I was swinging or any other activity, really,” Harper said. “I needed to get the swelling out of there. I think the swelling was probably irritating me really bad. We finally just decided to take the 10 days to give it a break and give it a little rest. It’s definitely helped. I feel a lot better.”

Harper said he had normal trepidation getting back in the batter’s box after taking a 97 mph fastball to the face from St. Louis Cardinals pitcher Genesis Cabrera, but it was nothing he couldn’t overcome.

“It’s definitely nervous, right? You get a little nervous,” he said. “But  I felt pretty good. Like I said before, it’s part of the game. Any time you step in the batter’s box, you feel like it could happen. And that’s how I felt prior to getting hit.”

As a hitter, fastballs gave Harper some trouble in the 15 games he played after getting hit. Harper would not blame that on the sore wrist.

“Sometimes it just happens,” he said. “Sometimes they just get it by you. You have to figure it out and come back and try to be better.”

Harper entered Saturday’s game hitting .274 with seven homers, 13 RBIs and a .884 OPS in 38 games. His strikeout percentage of 27.8 was higher than any he’s had in any season.

In addition to his wrist, Harper has dealt with nagging issues in his lower back and right shoulder this season. The trip to the IL has cleared up everything.

To make room for Harper on the active roster, the Phillies placed reliever Hector Neris on paternity leave.

Didi Gregorius said the pain and swelling has subsided in his right elbow. He took batting practice Saturday. Gregorius will likely need some minor-league playing time before he’s activated, but it’s not clear when that will happen.