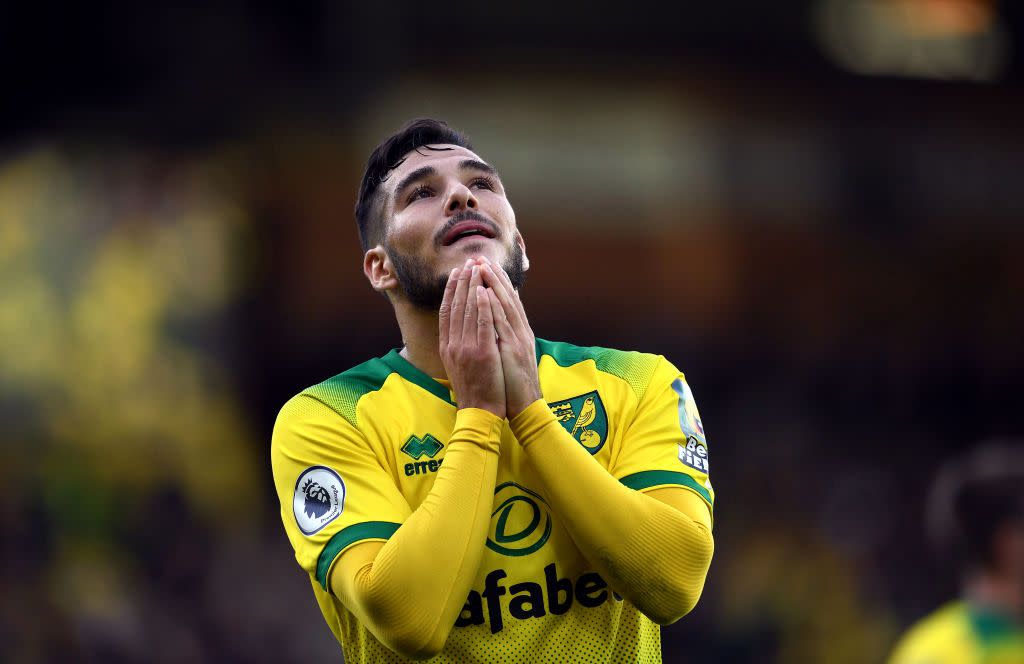 The latest transfer news focuses on Emiliano Buendia to Arsenal or Aston Villa, as the Norwich and Argentina playmaker is in demand.

Buendia, 24, was the player of the season in the Championship in 2020-21 as he led Norwich to instant promotion back to the top-flight with 15 goals and 16 assists.

That has also led to plenty of Premier League clubs scrambling to sign him, although the Canaries are said to be relaxed about his situation and will hold firm for the transfer fee they want.

Is Buendia really going to make a splash in the Premier League this time around after he struggled to star in 2019-20 (one goal, seven assists) as Norwich were relegated?

Arsenal and Aston Villa seem to think so…

Arsenal keen to focus on Buendia

Mikel Arteta isn’t likely to get Martin Odegaard back from Real Madrid after his loan spell at Arsenal in the second half of last season, so he is switching his focus elsewhere for a playmaker.

The Gunners pushed hard to sign Buendia in January but Norwich kept him to spearhead their promotion push. That was a good decision.

According to a report from The Times, Arsenal will now go all-in for Buendia as their key addition this summer.

With Emile Smith Rowe starring in a central attacking role last season, plus Joe Willock back from his successful loan and the likes of Bukayo Saka, Nicolas Pepe and Willian around in the attacking midfield areas, is this an area Arsenal need to strengthen?

Signing Buendia seems like a luxury buy as Arteta should surely firm up his defense first.

With the transfer fee set around $56 million, this would also suggest that Arsenal plan to move on plenty of fringe players and the likes of Alexandre Lacazette, Hector Bellerin and Eddie Nketiah this summer to free up some cash.

Buendia is the kind of player who could flourish in a better team and is always trying to get on the front foot and isn’t scared to make mistakes. That sounds like an Arteta player.

It is intriguing to see Villa pushing hard to sign Buendia, especially when they have Jack Grealish around.

Or is that the kicker here?

Villa’s captain has been linked with a move to Manchester City over the past 12 months and could a bid for Buendia suggest that Grealish could be heading out?

It’s too early for that, but it does seem like Buendia would have a big impact at Villa and there would be less pressure on him to perform compared to being at Arsenal.

A report from Goal says that Villa are leading the way for Buendia and have put in a ‘very good offer’ but no bid has been accepted by Norwich, yet.

Dean Smith and Villa have done well when recruiting from the Championship, as the purchases of Matty Cash and Ollie Watkins last season proved, but this is a lot of money for Buendia.

Is there room for him alongside Grealish in midfield? What about John McGinn? They need to replace Ross Barkley after his loan ended, but there is a threat of Villa becoming unbalanced in midfield.

Also, the fact that Villa and Arsenal are now battling for the same players in the transfer market tells you more about Villa’s ambition than Arsenal getting back on track.