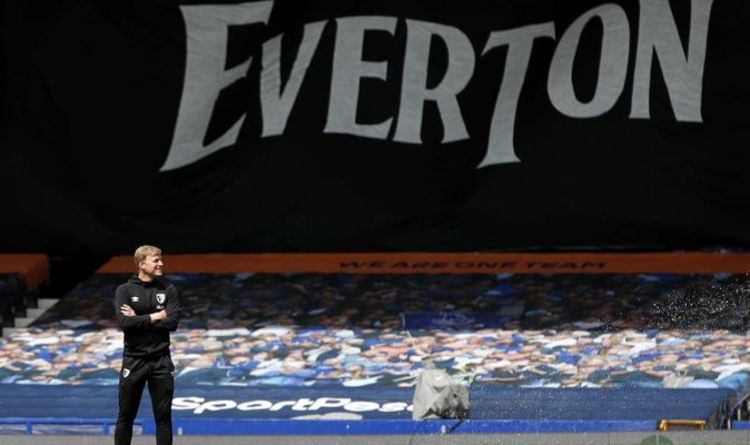 Everton have four options on their managerial shortlist with Eddie Howe pushing the hardest to land the job. The Toffees were left bemused by Carlo Ancelotti’s decision to join Real Madrid as boss in a whirlwind 48-hour period.

Former Bournemouth boss Howe is pushing hard for the vacant Everton job as he looks to return to management.

The Englishman is one of four managers being considered for the position at Goodison Park.

It follows the unexpected departure of Ancelotti, who left for Real Madrid earlier this week in a huge blow to the club’s ambitions.

The Toffees were hailed for their magnificent coup of the three-time Champions League-winning coach.

But the offer from the Bernabeu was too enticing for Ancelotti, leaving Everton looking for a sixth permanent manager in five years.

Club officials will not be rushed into a decision and are prepared to take their time this summer before finding a replacement but one man is pushing them to make a decision.

According to the Mirror, Howe is desperate to return to management and sees the Everton job as the perfect one for him.

Many believed he would join Celtic but there has been no movement on that front while the 43-year-old is still highly thought of by many around the country.

He spent eight years as head coach at Bournemouth, where he masterminded their double-promotion to the Premier League from League One in just three years.

And despite their small stature, Howe did a remarkable job keeping the Cherries from relegation for five years before being sent down to the Championship last year.

The Mirror also report that three other options are being considered – two that the Everton fans know well.

Former Wolves manager Nuno Espirito Santo remains the favourite having left the Molineux this summer and looking to go straight back into management.

Both have already enjoyed a spell at Goodison Park but whether either would leave their current posts remains to be seen.