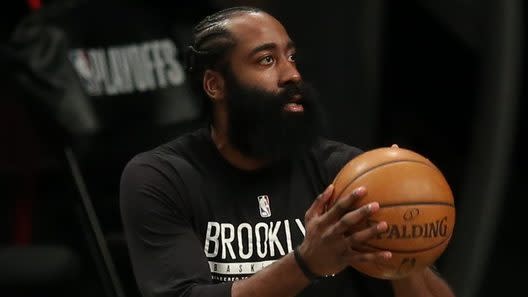 James Harden — a player critical to Brooklyn’s success against Milwaukee — strained his hamstring less than a minute into Game 1 and is out for the remainder of the game.

The injury occurred in the first :30 seconds of the game. Harden drove the lane against Jrue Holiday, tried a hesitation move, and pulled up grabbing his hamstring. Soon after, he was headed to the locker room.

The Nets announced not much later Harden would be out for the remainder of the game.

Harden missed 18 games over the second half of the season due to a strained hamstring. He returned for a couple of games at the end of the season, but he then played a full load of minutes in Brooklyn’s first round playoff series against Boston.

Harden is important to the Nets’ success against the Bucks because he is their facilitator — he keeps the ball moving and doesn’t let the team devolve into “you take a turn, then I take a turn” isolation basketball. Kyrie Irving willingly turned the point guard/facilitator role over to Harden, and he thrived in it this season.

Harden will likely undergo an MRI in the next 24 hours to determine the severity of the hamstring injury.

Here’s more on the Nets

Harden leaves with injured hamstring, out for remainder of game originally appeared on NBCSports.com