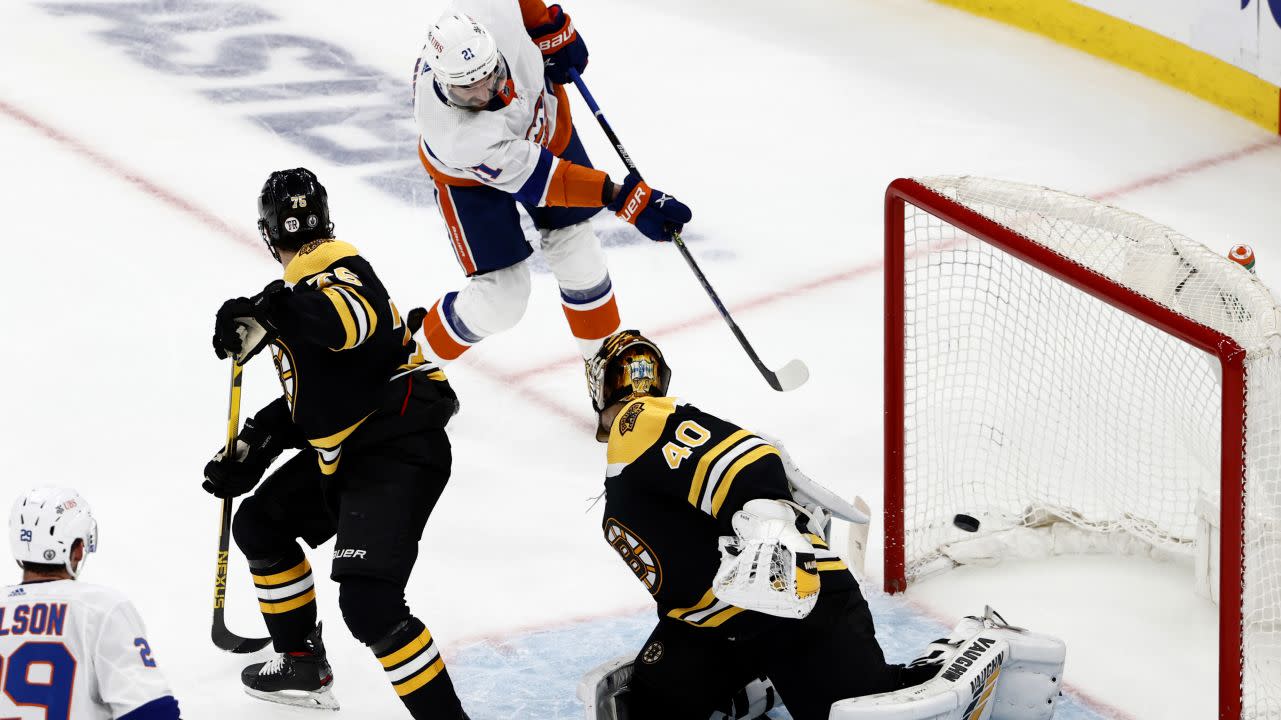 The Boston Bruins are on the edge of elimination from the 2021 Stanley Cup Playoffs, and to save their season they must win on the road Wednesday night in Game 6.

It’s not going to be easy for the Bruins. Nassau Coliseum has been provided the Islanders with a raucous atmosphere all postseason, and especially in this series. The Islanders have played really at home, too, coming up just short in a Game 3 overtime loss before winning Game 4. New York also won Game 6 over the Penguins to close out their first-round series, so Wednesday’s scene will be a familiar one for the Isles.

Here are three takeaways from the Bruins’ 5-4 defeat in Game 5.

1) Bruins’ PK was a disaster

The Bruins and their fans at TD Garden were not happy with the officials throughout Game 5.

The B’s certainly had a case on Sean Kuraly‘s slashing penalty late in the first period. It was a pretty weak call, and the Islanders scored on the ensuing power play when Mathew Barzal scored to extend his goal streak to three games.

The Islanders scored twice more on the power play in the second period. Kyle Palmieri buried a shot after the puck took a bounce off both (!) of Connor Clifton’s skates in front of the net, and then Barzal set up Jordan Eberle with a nice cross-ice feed.

The Bruins penalty kill has been abysmal in this series. Sure, they’ve had some bad puck luck on a couple goals, but their issues in this area of the game go way beyond that.

Injuries are a factor. Not having two reliable penalty killers in defensemen Kevan Miller and Brandon Carlo because of injuries is a tough setback.

There have been plenty of breakdowns, too. The B’s are letting too many seam passes through. They’re not winning enough 50-50 puck battles. They aren’t clearing the puck efficiently — just look at Sean Kuraly’s turnover before Kyle Palmieri’s second-period goal. The B’s also aren’t doing a good job disrupting the Islanders’ zone entries. And even though Barzal’s and Eberle’s shots were top quality, you need Rask to make a save on one of those. Rask wasn’t at fault on either goal, but when the momentum is going against you, a huge shorthanded stop can really give a team a boost.

The Bruins must show massive improvement on the penalty kill or this series could easily end Wednesday night.

The Bruins reportedly were among the teams interested in veteran winger Kyle Palmieri before the Islanders acquired him from the Devils before a few weeks before the April 12 trade deadline. The Bruins eventually traded for Taylor Hall in a deal with the Sabres.

Through five games of this series, Palmieri has made more of an impact than Hall. Palmieri scored on a second-period power play in Game 5, giving him five points (three goals, two assists) in five games. He has scored in three of the five games and picked up at least one point in four of them.

Hall has one goal (an empty-net tally) in Game 1 and was excellent in Game 3, during which he picked up an assist on Craig Smith’s first-period goal. The Bruins actually had a 15-0 edge in shots on net when Hall was on the ice during 5-on-5 action in Game 3.

Boston’s second-line left winger hasn’t been bad by any means in this series, but the B’s still need a little more finish from him. It’s great that the B’s second line is possessing the puck and creating scoring chances at a high rate, but at some point those looks need to end up in the back of the net. Krejci has found his groove with goals in each of the last two games. The B’s need a similar resurgence from Hall beginning in Game 6.

In the battle between impactful trade deadline acquisitions, Palmieri has given the Islanders an advantage in Round 2. It hasn’t been a massive advantage, but it matters in a close series.

The Pittsburgh Penguins dominated play at 5-on-5 against the Islanders, generating between 55 and 60 percent of all shot attempts, shots on net and scoring chances.

The Bruins have been by far the better team at 5-on-5 through five games, and Monday night’s matchup was yet another example. The B’s held a 64-30 edge in shot attempts, a 35-15 advantage in shots on net, a 22-18 lead in scoring chances and a 3-2 goal differential during 5-on-5 action.

Boston was all over New York in the first period and should’ve gone into the intermission with at least a two-goal lead. Instead, the Bruins failed to capitalize on their dominant play and went into the break tied after an Islanders power-play goal late in the period.

Not producing more goals from all of the offensive zone time the Bruins have enjoyed in this series, particularly early in games, is a real area of concern for Boston. The Islanders are the classic case of a team you can’t let hang around. They are the ultimate bend-but-don’t-break group. It might be rough at times for the Islanders, but they rarely let the score get out of hand. They withstand lots of challenging stretches where the ice is heavily tilted against them.

The Bruins could’ve made the Islanders’ job pretty tough after the first period but didn’t. The Islanders grew more confident in the second period and opened a multi-goal cushion by outscoring the B’s 3-1 in that frame. If the Bruins are going to extend this series to a Game 7, they must put the Islanders away as early as possible Wednesday night. Right now, you’d have to favor the Islanders’ chances if Game 6 is close in the third period.