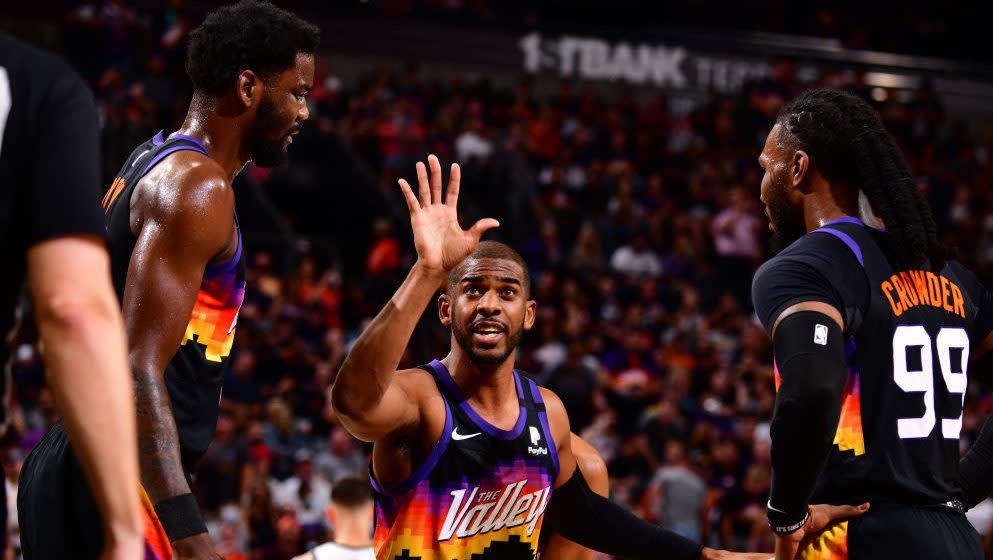 In the end, Chris Paul was picking apart every move the Nuggets defense made. Switch the pick-and-roll or just leave a single defender on him and Paul attacked, scoring 10 points in the first four minutes of the fourth quarter. Double him and the ball quickly swung to an open corner three.

Denver had hung around for two-and-a-half quarters, leading that far into the game, but Phoenix played more focused defense in the second half, and the stops led to a few easy buckets, and it was on — a 16-0 Suns run in the third quarter changed the game. The Nuggets were still only down nine entering the fourth, but then Paul sparked another 14-5, and that was it. The Phoenix crowd was deafening, the Suns were rolling and called ballgame.

Chris Paul looked like his vintage self — a scary prospect for the Nuggets — and finished with 21 points and 11 assists, looking every bit the point god, helping the Suns pull away for a 122-105 Game 1 win. Game 2 is Wednesday night in Phoenix.

The biggest concern out of the game for Denver is Michael Porter Jr.‘s back. Porter came out after halftime with a big wrap on his back, and while he played through it MPJ was not the same in the second half. Coach Michael Malone said postgame that Porter “tweaked” his back but should be good to go for Game 2. Denver needs him, but any injury to Porter’s back is a cause for concern (red flags about back injuries are what caused him to drop in the draft).

Deandre Ayton played solid defense on Nikola Jokic all night, and while the Nuggets big man still had 22 points he was 10-of-23 shooting and had just three assists. It was as good a job as can be expected of holding the MVP-to-be in check.

Beyond Paul, the biggest problem for the Nuggets was their lack of depth in the backcourt due to injuries — no Jamal Murray, no Will Barton, no PJ Dozier. That finally caught up with them. Monte Morris struggled in this one and was -28, Austin Rivers was better but not a positive force.

Meanwhile, Phoenix’s depth was at the heart of their success, as it has been all season. All five starters were in double figures.

Denver has been a middle-of-the-pack defensive team all season, but minus a few key players it is weaker on that end. Phoenix took full advantage, got the shots they wanted all night and knocked them down. Denver needs to find some defense — and a way to free up Jokic more — by Wednesday, or Chris Paul will have a repeat performance.

Here’s more on the Suns

Chris Paul carved up Nuggets defense, Suns pull away in second half for Game 1 win originally appeared on NBCSports.com