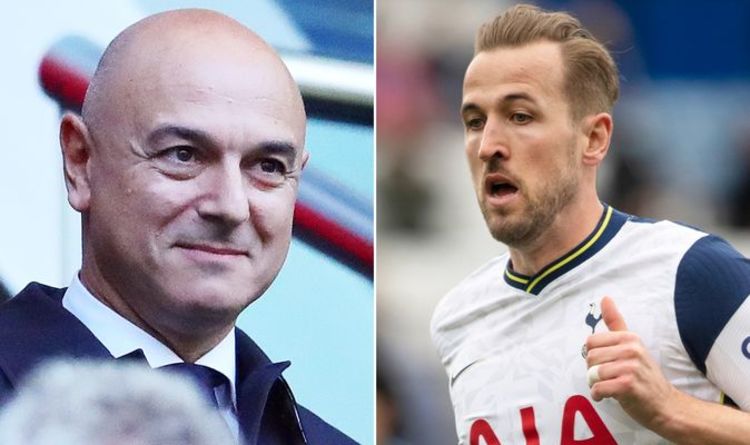 If Harry Kane leaves Tottenham Hotspur during the summer transfer window it will not be part of a swap deal, if chairman Daniel Levy has his way.

The Spurs chief remains committed to keeping the England captain in north London for at least another season, but Kane has made no secret that he is open to a transfer this summer, with Manchester City, Manchester United and Chelsea among the clubs linked.

The 27-year-old still has three years remaining on his Tottenham contract, meaning that any successful transfer offer will likely need to be a new Premier League transfer record. And Levy is believed to only be willing to consider offers of over £150million.

That news will come as a blow to Man City, who were reportedly interested in a swap deal of Raheem Sterling and Gabriel Jesus for Kane.

But Spurs, who are looking to rebuild their squad after a disappointing seventh-place finish in the Premier League last season, want a cash-only offer to give themselves transfer flexibility, according to a report in The Sun.

Despite Kane’s willingness to leave in search of major silverware, Spurs remain hopeful of keeping their talismanic centre-forward as they look to avoid a repeat of the post-Gareth Bale transfer saga at the club.

“I mean he [Daniel Levy] might want to sell me,” Kane said.

“I’m not going to be worth that for the next two or three years.

“I want to play the Champions League… I want to be playing in the biggest games.

Any decision over Kane’s future is unlikely to be made before July, with the 27-year-old currently focussed on leading England’s campaign at the European Championship.

Kane and his international teammates get their Euro 2020 campaign underway on Sunday afternoon against Croatia, with further matches against Scotland and the Czech Republic to follow in Group D.