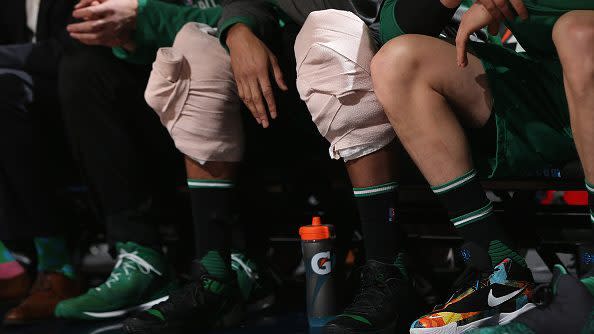 While that felt obvious, a study by Kevin Pelton of ESPN confirmed the numbers, which Baxter Holmes put into a story.

The average number of players sidelined per game due to injury, non-COVID-19 illness or rest this season was 5.1 (includes both teams), according to ESPN’s Kevin Pelton, the highest since he started tracking it in 2009-10. That does not include games missed by players in the health and safety protocols….

The increase was even more pronounced when focusing on the league’s stars. This season’s All-Stars missed 370 of a possible 1,944 games (19%), the highest percentage in a season in NBA history, according to Elias Sports Bureau research. They missed an average of 13.7 regular-season games each this year.

It’s worth emphasizing, these are the non-COVID-related games missed. Throw those in and the numbers would skyrocket.

A lot of this was soft tissue injuries — 2,909 missed games from them, according to Jeff Stots of In Street Clothes — something that has carried over to the playoffs with both Brooklyn’s James Harden and Utah’s Mike Conley missing time with hamstring injuries.

The NBA league office has argued from the start injury rates this season were not out of line with previous seasons. They argue that while there may have been more single games missed as teams and players were cautious around injuries, the more serious injuries that kept players out multiple games were not higher.

It didn’t feel that way to the eye test, and Pelton’s numbers at ESPN back that up.

The reasons for the rise in injuries were pretty obvious — the NBA and players union agreed to condense a 71-game schedule into less time in an effort to make the most money possible and get done in time to put next season on its traditional October to June tract. Games every other day and more back-to-backs meant less time between games, less time for recovery, and less time for strength and flexibility training during the season to help prevent injuries. Throw in a lot of coronavirus testing — multiple times on game day — to throw off sleep and practice patterns, and you have a perfect recipe for injuries.

One Western Conference athletic training official said it was difficult leaguewide to properly train players during the season, both because of the rigorous daily COVID-19 protocols and because players were increasingly deprived of sleep, leading to more player rest and canceled shootarounds and practices.

“When you can’t train, you get soft-tissue injuries,” the athletic training official said. “It’s a known fact.”

To help prevent injuries from being aggravated and getting worse, players were often held out of games and practices out of caution, multiple trainers told ESPN.

None of this is a surprise. This was a stressful season for players and staff, both physically and emotionally — and there is a shorter-than-normal turnaround into next season to get the NBA back on its traditional calendar. Hopefully, next season the injury rate will drop again as the league spaces out games and players can better maintain training during the season. But it will be something to watch.

Check out the latest on the Nets