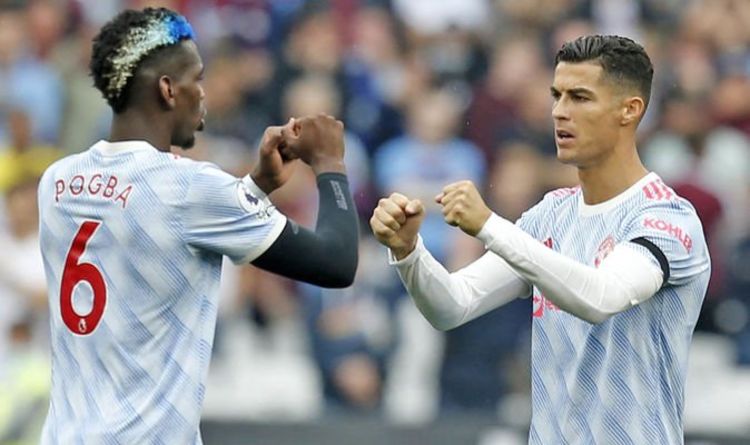 Manchester United star Paul Pogba is delighted with Cristiano Ronaldo’s Hollywood homecoming as the club scramble to tie him down to a new contract, reports say. The France international’s current deal expires at the end of the campaign. And, as of yet, he’s not signed a renewal.

Manchester United want to keep Pogba, who has been at the club ever since 2016.

Though he’s sometimes struggled for consistency under both Jose Mourinho and Ole Gunnar Solskjaer, the Red Devils are hopeful he’ll sign a new deal.

And The Athletic have provided an update on the 28-year-old’s situation at Old Trafford as the clock ticks down.

He’s said to ‘love’ the fact that Ronaldo returned, with the Portugal international joining from Juventus on transfer deadline day.

And he’s said to be taking his time over his future, with the Red Devils putting a big offer on the table.

That would make him one of the club’s highest earners, alongside both Ronaldo and goalkeeper David De Gea.

But, still, the new deal hasn’t been signed.

Pogba, at 28, knows this is a big summer for him. With the player approaching the peak years of his career, this is a chance to earn the biggest contract of his career.

Real Madrid have been linked, despite Florentino Perez’s long reluctance to sign a client belonging to Mino Raiola.

Juventus have, too, despite the Old Lady letting the midfielder move to Old Trafford nearly six years ago.

Conte’s comments on Tottenham job with Nuno under fire

And Barcelona can’t be ruled out, alongside Paris Saint-Germain.

Pogba is said to be ‘open’ to re-signing but, if he doesn’t by January, that leaves him entitled to negotiate with foreign clubs.

United could then try and sell him for a reduced fee to avoid losing him for nothing.

But it’s far likelier he’ll still be at the club until the end of the campaign, especially given his importance.

Meanwhile, John Barnes has opened up on Pogba.

And the former Liverpool and England star thinks that, if he’s to win trophies at club level like he has done on the international stage, he has to become more of a ‘team player.’

“Playing for France and Manchester United are two different things.

“He plays much better for France than Manchester United, and that has a lot to do with how he feels about playing for France, in terms of being a team player.

“Whereas, for Manchester United, with his price tag, and being who he is, and the way we treat our superstar players in England.

“He probably feels he is a superstar, so therefore plays differently, rather than being the team player he is for the national side.

“Winning a trophy with France won’t necessarily help him at Manchester United, until he decides to have the same attitude playing his club football, as he does for France.”

Raiola recently said Juventus were a possibility when it comes to signing Pogba.

“For sure Turin has remained in his heart and he cares a lot about these things.

“The possibility of returning to Juventus is there but it also depends on Juve.”