Daniil Medvedev rounding into form, into semifinals at Cincinnati Masters 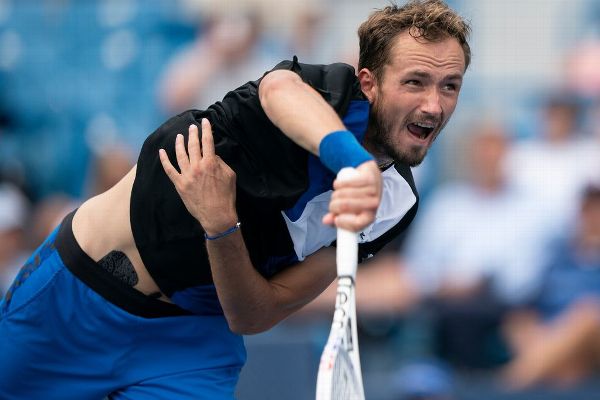 Medvedev, the 26-year-old Russian banned from Wimbledon for his country’s invasion of Ukraine, won the 2019 Western & Southern Open. He looked sharper Friday than he did last week in Montreal in a round-of-32 loss to Nick Kyrgios.

“Sometimes, first rounds in Masters are super tough,” Medvedev said. “Like I had Kyrgios in Montreal. Every match is a test, and so far, I have been doing great here. Usually, the conditions here are quite similar to the US Open, and when I do well here, I play good in the US Open, so so far, it’s looking this way.”

Borna Coric will face No. 11 Cameron Norrie in the other semifinal. Coric upset ninth-ranked Felix Auger-Aliassime, 6-4, 6-4 to become, at No. 152, the tournament’s second-lowest-ranked semifinalist since the start of the ATP rankings in August 1973.

Unseeded American Madison Keys, also a 2019 winner in the event, advanced to the women’s semifinals with a 6-2, 6-4 victory over Wimbledon champion Elena Rybakina. Keys has not dropped a set in four matches, including her upset of top-ranked Iga Swiatek in the round of 16.

Keys will face two-time Wimbledon champion Petra Kvitova, who cruised past Ajla Tomljanovic, 6-2, 6-3. The unseeded Kvitova, ranked 28th, will be Keys’ third consecutive opponent with a Grand Slam title to her credit.

“I think that’s just how tennis is,” Keys said. “We have plenty of players who are not seeded or in the low (rankings) teens who have been on a tear all year, and they are still, in my opinion, top players or they are former champions. I just don’t think that there is any easy draw, even if you’re not playing the No. 1 or 2 player.”

“It’s a lot of matches in tough conditions,” the 29-year-old Frenchwoman said. “I had to play a lot of matches back to back. It’s good for me, because it give me confidence that the hard work we are doing on court and off court is paying off, because I managed to go on court every time as easily as I can and with good feeling on my legs. So it’s very positive for my team and for myself. It’s a good accomplishment and it can give us confidence for the rest of the year.”

Play suspended for day due to rain, tournament to be decided over 54 holes