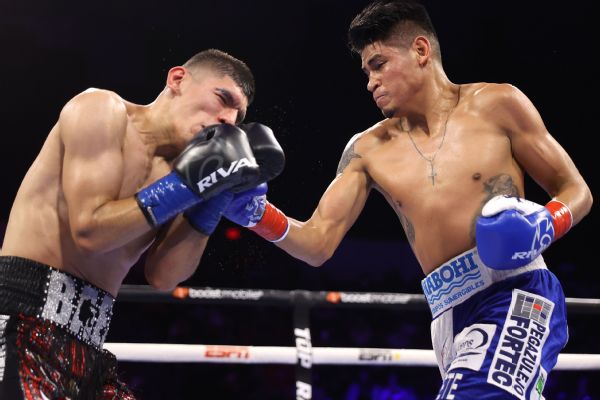 Emanuel Navarrete looked like he was about to be in a fight. One shot to the body of Eduardo Baez ended any thought of that.

It was a technically beautiful setup by Navarrete, who knocked out Baez in the sixth round to retain his WBO featherweight title and defend his belt for the third time.

Navarrete landed a shot to the left side of Baez coming off a right uppercut. Baez paused for a second and then took a knee and couldn’t even attempt to get up from there, falling to the canvas outright after the 10-count ended the fight 1 minutes, 5 seconds.

“It comes with my blood,” Navarrete said of the punch after the fight. “And you can see, I don’t throw a perfect left hook like you’re used to seeing, but this one came out perfect for me, and you saw the result because not many guys can take that shot.”

The fight was close and competitive going into the sixth round. Baez (23-3-2, 7 KO) had outlanded Navarrete 92-89 in the first five rounds and seemed to be handling Navarrete’s unorthodox style well. At points, Baez even felt like the aggressor against Navarrete (36-1, 30 KO), who hasn’t lost a fight in over a decade.

By fight’s end, Baez outpunched Navarrete 96-94 and landed more body punches, 34-12. He also had more jabs than Navarrete, 23-20, but Navarrete landed more power punches, 74-73. Baez also landed a better percentage of his punches in every round of the fight.

At the time of the stoppage, Baez was up on two of the three judges’ scorecards, according to the ESPN broadcast.

“I expected a fight like this,” Navarrete said. “I never underestimated Eduardo Baez. I always knew that he was an excellent fighter and the fact that he hit pretty hard and it was a lot more complicated than I anticipated.

“Then came that shot, and I was able to finish him.”

Navarrete, 27, said his 10-month layoff and having to make 126 pounds made the fight more difficult for him. He declined to say whether this would be his last fight at featherweight, but said he believes he has multiple options for his future.