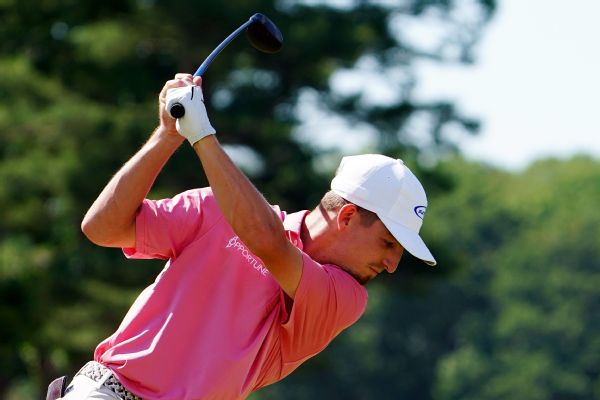 PARAMUS, N.J. — Texas A&M senior Sam Bennett won the U.S. Amateur on Sunday, building a 5-up lead over Ben Carr and holding on for a 1-up victory at Ridgewood Country Club.

Bennett is No. 3 in the world amateur ranking and had to get past three straight players ranked in the top 10 to reach the championship match.

It was tighter than he would have wanted.

Bennett was 3 up after the first 18 holes and won two more holes early in the afternoon to seize control. Carr kept chipping away and pulled within one hole with a 15-foot birdie putt on the par-5 17th.

“I got off to a hot start, then after lunch, he started dropping in putts and chips from everywhere,” Bennett said. “It made me nervous. I got pretty tight.” Needing to win the 18th to extend the match, Carr missed the fairway to the right and came up short. He chipped to 8 feet. Bennett was on the green and had two putts from 12 feet to win. He lagged it within inches for the win.

“Luckily, I was able to finish it off with a good iron shot,” Bennett said.

Bennett is exempt into the Masters, US Open and British Open next year.

“It means everything,” Bennett said about the victory. “It’s a dream cone true. … It means a lot to hold that trophy.”

Carr is a fifth-year senior at Georgia Southern.

“I’m OK,” Carr said. “Congrats to Sam. He’s an awesome player. We had a great battle out there.”