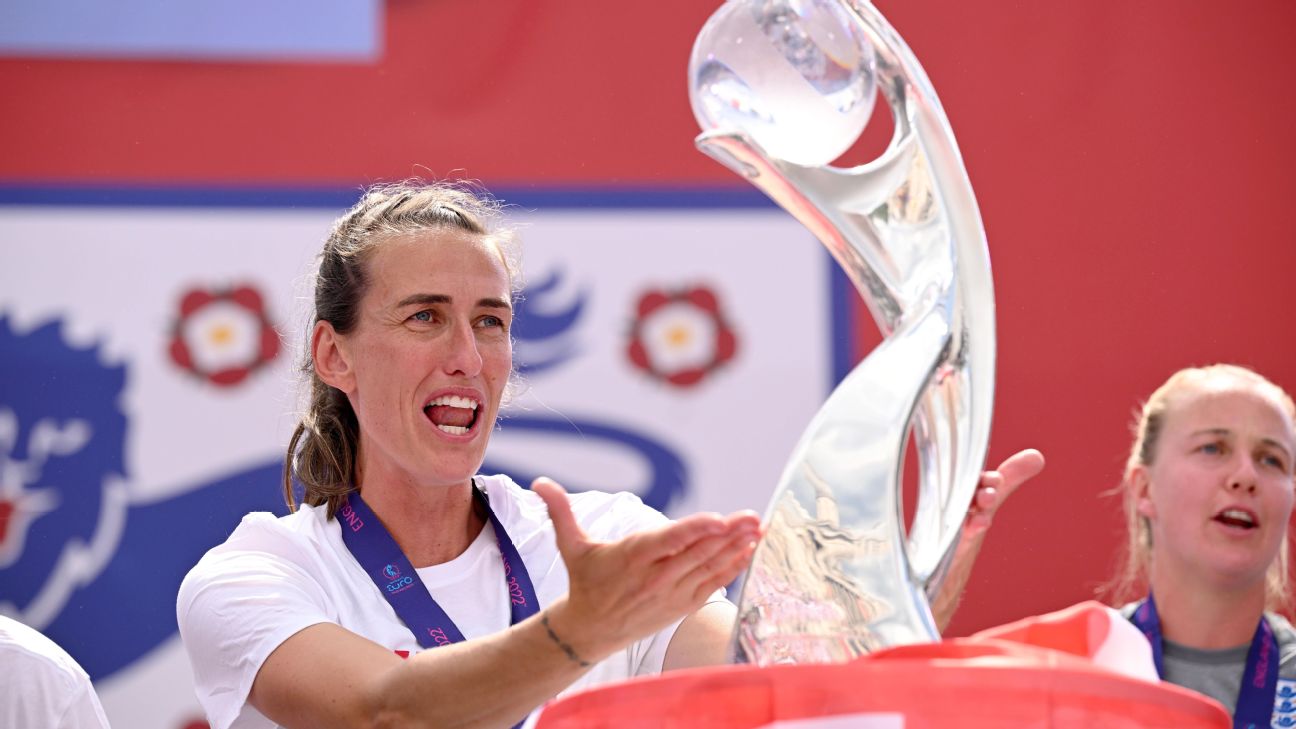 England legend Jill Scott has announced her retirement from football, bringing an end to a remarkable 16-year spell with the national team in which she won 161 caps.

Scott, 35, was an integral part of the England women’s squad who won the 2022 European Championship. She was used as a substitute in four of their six matches, including the final, when she came on as a second-half replacement in the 2-1 win against Germany.

The midfielder was playing in her eighth major tournament with England, having played in four World Cups and four European Championships. She also played for Team GB at the 2012 and 2020 Olympics.

“You know the last thing I ever did on a football pitch? It was perfectly me,” Scott wrote in her column for the Players’ Tribute. “We had celebrated, the streamers were going off, and I was just sitting there with my medal on the grass for an hour and a half, taking it all in … and I knew, deep in my heart, that this was it.”

Scott’s tally of 161 caps means she ends her international career as England’s second most-capped player behind Fara Williams, who won 172 caps from 2001-2019.

Having made her debut back in 2006, Scott was one of the first players to receive a full-time playing contract from the FA in 2009. She started her club career with Sunderland, before moving to Everton in 2006. She played there through to 2013, when she moved to Manchester City. There she won the Women’s Super League in 2016 as well as three FA Cups before leaving the club when her contract expired this summer.

Scott was a runner-up with England at the 2009 Euros, when they lost the final 6-2 to Germany, and was also part of the team who reached the 2015 and 2019 World Cup semifinals.

But the crowning moment of her international career came as she helped England win their first major trophy in 56 years this summer. Captain Leah Williamson described Scott as the “people’s champion” while Lucy Bronze said Scott had been at the “centre” of defining moments in England’s history.

FA director of women’s football Baroness Sue Campbell said: “An all-time great, Jill has been a wonderful ambassador. Not just for the England team – to which she has given incredible service – but also English football in general. Her journey to the world stage is truly remarkable and she can be so proud of the part she has played in growing our game in that time.

“Jill is the definition of a Lionesses legend and is loved by so many. You can tell the affection fans have for her from the way her appearances at the EURO were greeted every time by deafening noise. Personally, I shall miss that wonderful smile and unique sense of humour whenever lucky enough to be in her company. Whatever the future holds, she will always be a part of our family.”