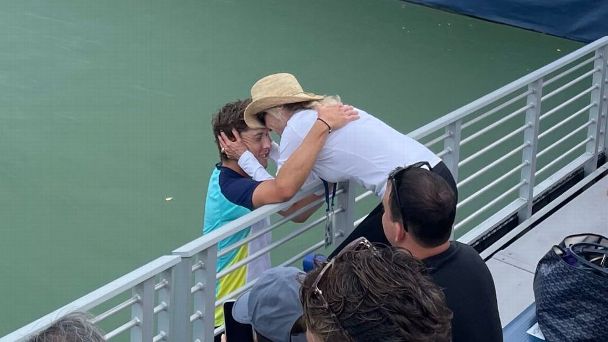 NEW YORK — Pictures and mentions of Tracy Austin are everywhere at the Billie Jean King National Tennis Center. As the youngest US Open singles champion in history — and a two-time winner at the major — Austin has a storied place in tournament lore.

Forty years since she last played at the event, the former world No. 1 watched from the sideline as her son Brandon Holt, 24, won his third match in five days Friday to qualify for the first major main draw of his career. After the final point had been decided in his dramatic 6-4, 3-6, 6-3 victory over Dimitar Kuzmanov — which lasted over six hours because of rain delays, including one ahead of his fourth match point attempt — Austin put her head in her hands. Then both mother and son raised their arms in triumph.

Holt then made his way over to Austin and the two shared an emotional embrace that quickly went viral.

🇺🇸 Brandon Holt, the son of the #USOpen‘s youngest women’s singles champion, @thetracyaustin, is into the main draw. pic.twitter.com/eUCqmJE1r0

While the wins came early for Austin — she was just 16 when she earned her first US Open title in 1979 — Holt has had a different path. After some success in juniors, including reaching the 2015 doubles final at the US Open, Holt turned his sights to the college ranks and played for USC, where he was an All-American and reached a singles high ranking of No. 4 and No. 2 in doubles.

Holt turned professional in 2020 and since then has played Challenger Tour and other lower-level events. A serious hand injury and subsequent surgery in 2021 threatened to end his career before it ever really began. Austin, who is not Holt’s coach but trains with him regularly, spoke to ESPN’s Rennae Stubbs after his first qualifying win on Monday and couldn’t hide her tears.

“He’s worked so hard,” Austin said before her voice broke. “He had surgery on his hand, he was out eight months and he came back. He’s just a great kid. I’m just really emotional.”

Since returning to competition, Holt has won five ITF titles this season and moved up over 600 ranking spots. He rose to a career-high ranking of No. 293 earlier this month but has yet to play in the main draw of an ATP tournament. And now, after years of ups and downs and being best known as “Tracy Austin’s son,” he will have a chance to make his own name at the US Open.

Of course, it won’t be easy. He will have the biggest match of his life so far on Monday against top-ranked American Taylor Fritz on Grandstand. Merely by qualifying for the main draw and playing in the first round, he will pocket $80,000 — which will more than double his combined career earnings. But no matter what happens against Fritz, or in doubles where he received a wild card with former UCLA standout Govind Nanda, the moment feels full circle for Holt.

“I’ve been coming here literally since I was a newborn baby,” Holt told Tennis.com on Friday. “I’ve probably been here 20 times, so it’s definitely just normal for me to see. What I think about more is how when I was young, I would think about how cool it would be to play here. I was eating those Minute Maid lemonades, watching the matches and thinking, ‘These guys are so good,’ while just hammering straight sugar. So, to be here playing is just so much fun. I see the kids watching and I was them, so it’s really cool to be out there playing.

“I don’t really feel very much pressure at all,” Holt continued. “In a lot of ways, it’s definitely an advantage to have [Tracy Austin] as my mom; she has great pointers and helps me out a lot to understand this sport, recovery, all the aspects of tennis, and also sports in general, the mental side of everything. She played at the highest level, so it’s definitely an advantage to have her, and that’s how I see it.”