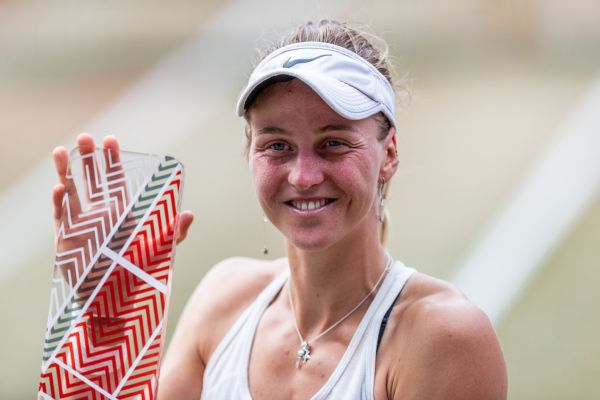 CLEVELAND — Liudmila Samsonova of Russia won her second straight WTA Tour title, beating seventh-seeded Aliaksandra Sasnovich of Belarus 6-1, 6-3 in the championship match at Tennis in The Land on Saturday.

Samsonova, ranked No. 45 in the world, did not lose a set in five matches at the U.S. Open tuneup in Cleveland. She claimed the Citi Open crown in Washington three weeks ago and heads to New York with a career-best, 10-match winning streak.

No. 36 Sasnovich was seeking her initial WTA championship, but never held the lead in the 72-minute final on the stadium court at Jacobs Pavilion at Nautica. Samsonova broke her in all four service games in the opening set.

“I’m a little bit sad right now, but I’m happy for Liuda, who is going to be top 10 soon, I hope,” said Sasnovich, who is 0-4 in career finals. “She is so humble, educated and a kind person. I tried to do my best, but Luda was better today.”

The unseeded Samsonova displayed precision shot-making on back-to-back days, having ended Bernarda Pera’s 13-match win streak in just 53 minutes in the semifinals. She won 32 of 36 service points against Pera, then converted 31 of 46 against Sasnovich.

Samsonova wrapped up her third career title with a baseline backhand that caught the tape and fell softly in front of a charging Sasnovich.

Both players were listed as individuals by the WTA, which has suspended recognition of the Russian and Belarus tennis federations following their nations’ invasion of Ukraine.

“We were both without the flag this week, so I want to give very big congratulations to Sasha and her team,” Sasnovich said. “We heard you fans so, so loud through the week. Thank you. I hope to be back next year.”

Anett Kontaveit of Estonia was the inaugural Tennis in the Land champion in 2021, but did not return to the tournament.

Second seeds Nicole Melichar-Martin of the United States and Ellen Perez of Australia captured the doubles final 7-5, 6-3 over fourth-seeded Anna Danilina of Kazakhstan and Aleksandra Krunic of Serbia.

Melichar-Martin and Perez won their first championship as a team after finishing second at Toronto and Cincinnati earlier this year.