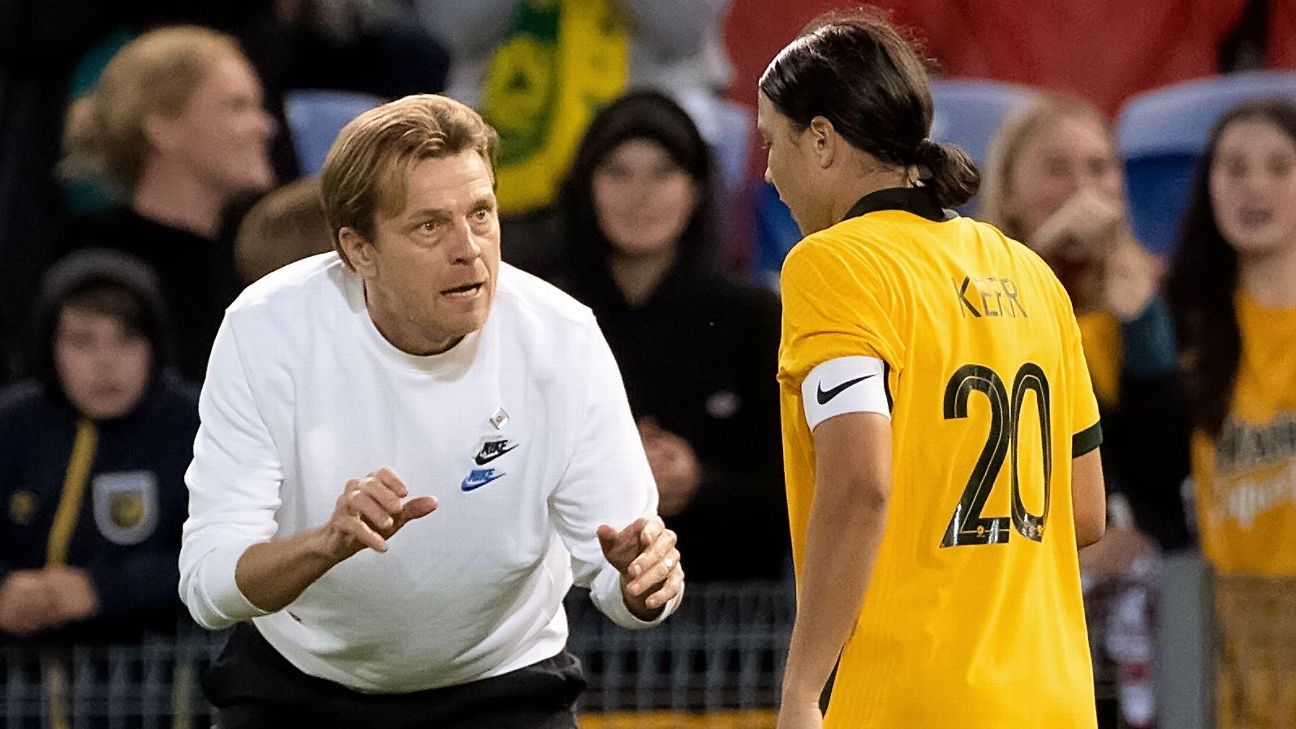 When the Matildas kick off their match against Olympic gold medallists Canada in Brisbane on Saturday, there will be just 320 days until the start of the 2023 Women’s World Cup.

Whether 10 months and 17 days represents a long period of time or an all-too-brief window, is all about perspective.

With eight wins in 24 matches the oft-mentioned statistic since Tony Gustavsson was installed as head coach, Australian fans are desperate for some reassurance that their national team is on track for World Cup glory — and lately the days feel like they are ticking by all too rapidly.

The 7-0 pummelling in June that the (admittedly understrength) Matildas suffered at the hands of a Spain side ranked No. 8 in the world, did little to assuage public fear of failure at home next July but, with the regular stars returning, this two-match friendly series against a somewhat developmental Canadian side presents the perfect opportunity to restore the faith.


After the luxury of 18 months experimenting with different combinations, including blooding 17 debutants, Gustavsson’s self-declared “line in the sand” means the pressure is now on to find some consistency with a core group.

By contrast, the World Cup preparation phase is just beginning for Canada coach Bev Priestman after her side recently secured qualification by progressing through the group stage at the 2022 CONCACAF W Championship in July.

Priestman has included 18 players from that squad, which ultimately finished runners up to the United States in Mexico, but she flagged that some notable absences have created the opportunity for others to impress in this window.

“I think that this far away from the World Cup, it makes sense to use this to assess some new players in the environment,” Priestman said after announcing her squad.

Currently No. 7 in the FIFA Women’s rankings, the Canadians will be without Deanne Rose, Vanessa Gilles and Jayde Riviere (injury), as well as Ashley Lawrence (personal reasons) and goalkeeper Steph Labbe, who retired in April.

The rock-solid defence that has become a hallmark of the Canadian women is set to be tested in the absence of Lawrence, Riviere and Gilles, who, along with Kadeisha Buchanan, formed a formidable backline at the CONCACAF W Championship, conceding just once in five games.

Even if the Australians execute the plan to breach a reshuffled Canadian defence, however, they will still need to get past Kailen Sheridan, who took over the gloves from the retiring Labbe with aplomb, earning herself the Golden Glove award as best goalkeeper at the tournament in Mexico.

The CONCACAF W tournament also proved the side has options at the other end of the pitch without relying on the evergreen Christine Sinclair, who will be looking for her 191st goal when she heads Down Under for a 316th cap. Jessie Fleming — a teammate of Sam Kerr‘s at Chelsea — bagged three of the side’s 12 goals sharing golden boot honours with her compatriot, Juventus midfielder Julia Grosso.

Aside from testing some new combinations on the park, Priestman also noted the benefit of experiencing the conditions Canada will face when they travel to the World Cup next year, not least the significant travel and jet lag.

In this window, that travel lag will still be a familiar feeling for the majority of the Matildas, with only Cortnee Vine and Larissa Crummer based locally.

Newly engaged Aston Villa forward Emily Gielnik also joined the camp on Monday, but the rest of the overseas contingent could not travel until their weekend commitments were complete — meaning Gustavsson’s first session with the complete squad took place on Wednesday.

Kerr has returned fresh off a fourth consecutive nomination for the Ballon d’Or Feminin, with fans hoping to see the talismanic striker’s signature goal celebration on home soil after it was immortalised on signage at Chelsea’s Stamford Bridge Stadium.

While Hayley Raso‘s late withdrawal saw her replaced by Princess Ibini on Monday, the balance of the squad remains unchanged and the formation of the team is eagerly awaited as keen observers of the Matildas search for a clue as to who is in Gustavsson’s final plans.

Competition for the gloves is fierce with Lydia Williams, Teagan Micah and Mackenzie Arnold all hoping to be the last one standing between the sticks when the goalkeeping merry-go-round stops.

With an Ellie Carpenter-sized hole still in the backline, Charli Grant has shown she possesses plenty of similar traits with her endurance and forward runs and may get another opportunity to cement herself in a defence that sees Steph Catley and Alanna Kennedy return after being rested for the June window.

Chloe Logarzo‘s speedy recovery from an ACL tear in September has earned her a spot back in the fold, and while she is unlikely to see many, if any, minutes (having just returned to competitive football), Gustavsson has said he is keen for her to “see the playbook.”

The midfield make-up in that playbook will be a key insight into his long-term game plan, and here the Swede is spoilt for choice. Even without Logarzo (and the experienced Elise Kellond-Knight, who has also just returned to the pitch in Sweden after a long spell out of competition), the talent in the middle of the park is plentiful with the likes of Emily van Egmond, Aivi Luik, Mary Fowler, Tameka Yallop, Kyra Cooney-Cross and a completely rejuvenated Katrina Gorry just some of the options available.

Whichever 11 players get the nod against Canada this weekend, the Matildas faithful are clamouring for some momentum, confident no doubt that with some consistency Australia can match the recent feat of the England women and lift a trophy on home soil.

England head coach Sarina Wiegman gave a masterclass on how potent consistency can be when she guided the Lionesses to their famous victory at the Women’s European Championships.

The Dutchwoman, who was named UEFA Women’s Coach of the Year and boasts 18 wins from 20 games in charge of England, deployed exactly the same starting XI for every match of the tournament even when the outcome was purely academic — the first coach in Euros history to do so (men or women).

It’s a scenario not unlike when she took the Netherlands to Euros glory at home in 2017, when using just 13 players throughout the tournament. The outcome? The players understood their roles and the roles of those around them, the substitutes knew their impact and value, and everyone was familiar with their responsibility within the team.

So how long did she need to prepare?

Wiegman had just 308 days between signing on as head coach of England and the start of the Euros — so from that perspective 320 days of preparation until the Women’s World Cup kicks off is plenty of time for the Matildas, but the time to start is now.