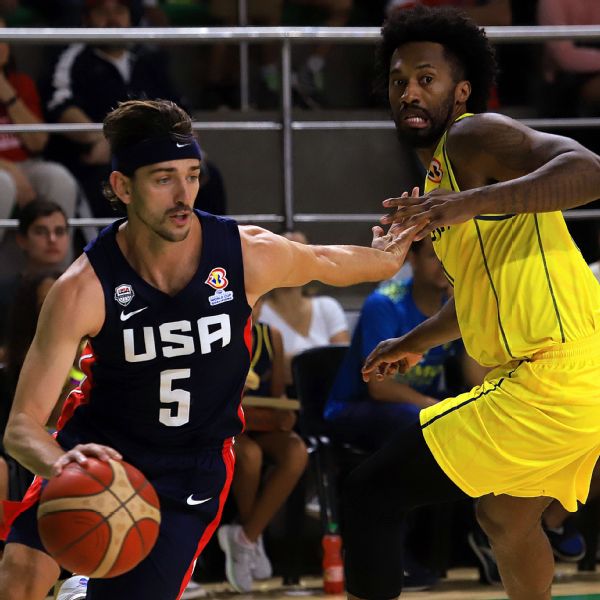 BARRANQUILLA, Colombia — USA Basketball is on the brink of qualifying for next year’s World Cup.

John Jenkins scored 26 points and the U.S. defeated Colombia 95-77 on Monday night in a second-round qualifying game. The win put the Americans in position to clinch a spot in the World Cup — to be held a year from now in the Philippines, Japan and Indonesia — when the next window of games takes place in mid-November.

Langston Galloway and DaQuan Jeffries each scored 14 points for the U.S., which gave up the game’s opening basket, then scored the next 12 points and never trailed again.

“To come out with this win is big-time for us,” Jenkins said. “We’re very excited.”

Jenkins was stellar in this two-game window for the U.S., including the Americans’ 105-71 win over Uruguay on Thursday in Las Vegas. His numbers in those games: 48 points on 17-for-25 shooting — a staggering 14 for 21 from 3-point range.

He was 8 of 14 from beyond the arc on Monday, the last three of those 3s coming in the final minutes of the fourth as the U.S. pulled away.

“His leadership has been the biggest part of this,” U.S. coach Jim Boylen said. “He loves playing on the road. He loves playing in hostile places. And he’s in great shape. He came in in great condition. He believes in USA Basketball. He believes in what we’re doing. He’s elite at following a game plan and he’s a veteran player who relishes wearing that USA uniform.”

It would take nothing short of an all-out collapse for the U.S. to not qualify for the World Cup. The Americans are in a six-team group in this round of qualifying, and the top three teams in the group are guaranteed places in next year’s 32-nation field.

A pair of end-of-quarter spurts proved crucial for the U.S.

The Americans outscored Colombia 8-2 in the final minute of the second quarter, turning what was a seven-point edge into a 45-32 lead at the break. And in the third, a 14-6 run to end the period gave the U.S. a 70-50 lead going into the final 10 minutes of play.

USA: The U.S. trailed for 2:22 out of a possible 80 minutes in the two games during this qualifying window, the other matchup being Thursday’s 105-71 victory over Uruguay in Las Vegas. … The Americans have won their last six qualifying games, doing so by an average of 20.3 points. … Eric Mika finished with seven points and a team-high nine rebounds.

Colombia: Braian Angola had a team-high 18 points. … The hosts were outscored 51-12 from 3-point range.

In Group E — the other six-team group in FIBA Americas region qualifying — Canada remains in control. The Canadians rolled past Panama 106-50 on Monday night. Venezuela beat the Dominican Republic 76-72, and Argentina held off the Bahamas 95-77.

Canada is 8-0, Venezuela is 7-1 and Argentina is 6-2, meaning those nations have the inside track for the top-three spots in that group and a World Cup berth. The Dominican Republic is now 5-3, and Panama and the Bahamas are both 2-6.

In addition to Philippines and Japan, which qualified as host nations, some spots in the 32-team World Cup field have been clinched in recent days. FIBA, basketball’s governing body, said Finland, Lebanon, Ivory Coast and New Zealand are also now officially in next year’s tournament.

No. 4 Stefanos Tsitsipas, No. 10 Taylor Fritz handed early exits in Day 1 of US Open