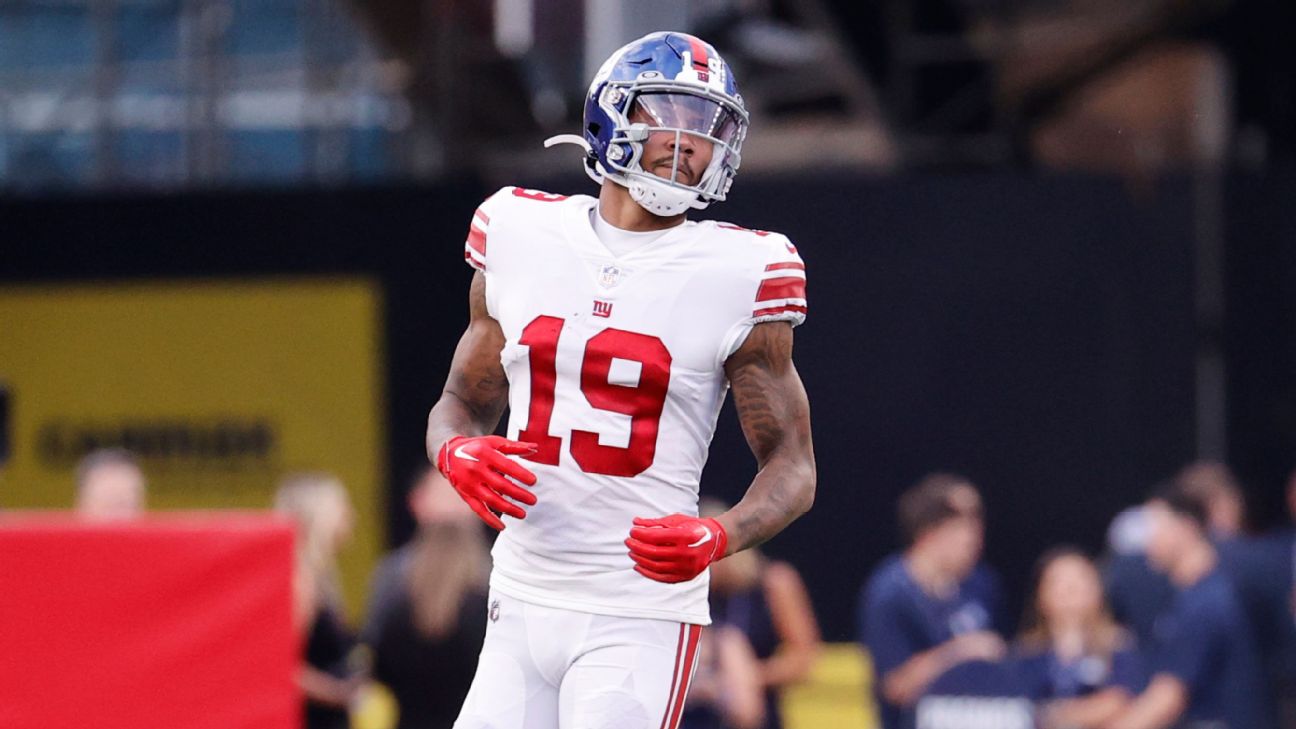 The procedure could help explain what has been an uneven summer for Golladay, who was on the field every day at training camp but had limited production and didn’t seem to be moving well at times.

Golladay had only one catch on four targets in 51 snaps this preseason, and curiously was the only veteran who had played significant snaps in the first two preseason games to also play Sunday against the New York Jets.

“He’s good. He’s come to work every day,” Schoen said. “Great kid, works hard, knows his assignments. I don’t think he’s missed a practice. He’s been available, other than the spring he had a little procedure. But he’s been good.”

Golladay, who did not participate in OTAs, wouldn’t disclose what type of procedure he underwent, but it marks the latest in what has become a string of injuries.

Golladay’s final season with the Detroit Lions in 2020 was marred by a hip injury, and he dealt with a hamstring problem that cost him most of last summer and slowed him early in the 2021 season — his first with the Giants. When Golladay finally started getting healthy last year, he suffered a knee injury in a Week 5 loss to the Dallas Cowboys.

The 6-foot-4 Golladay is seeking his first fully healthy season since 2019, when he led the NFL with 11 touchdown catches and finished with 1,190 receiving yards in 16 games with the Lions.

Golladay said Thursday he feels “pretty good” entering this season, the second of a four-year, $72 million deal with the Giants. He expects to produce more like the player he was with the Lions than last year with the Giants.

“First off, I just want to remain healthy,” Golladay said. “Very blessed that I was able to go through this whole training camp healthy, be able to actually be a part of each practice to get that chemistry down.”

Golladay later added: “I feel a lot better coming into this.”

Golladay isn’t the only Giants receiver hoping to have a healthier season. After a tumultuous rookie season where he missed seven games, second-year wideout Kadarius Toney also missed the entire preseason this year because of offseason knee surgery and a hamstring injury.

The Giants expect both Golladay and Toney to be healthy for their regular-season opener in 10 days against the Tennessee Titans.

Toney participated in Thursday’s practice, seemingly without limitations. The 2021 first-round draft pick was limited in practices as recently as last week because of his right leg, but has no doubts about his status against Tennessee.

Toney, like Golladay, is looking for a better Year 2 with the Giants after hauling in just 39 receptions for 420 yards without a touchdown as a rookie.

“I don’t really set goals, but I expect to do better than last year I would say,” Toney said.

Some of the receivers’ production is contingent on the performance of quarterback Daniel Jones, who also faces heightened expectations from the Giants.

Schoen said Thursday he is “happy” where Jones is after his first summer and preseason evaluating the team’s starting quarterback.

Schoen and the Giants’ new regime declined Jones’ fifth-year option this offseason but are intent on getting a substantial look at what he can do in coach first-year head coach Brian Daboll’s offense. Schoen said Thursday the “real evaluation” of Jones will come during game action on Sundays.

A team source told ESPN earlier this summer that signing Jones to a mid-season extension or placing the franchise tag on him before the start of the 2023 season if he excels in 2022 were in the range of potential outcomes.