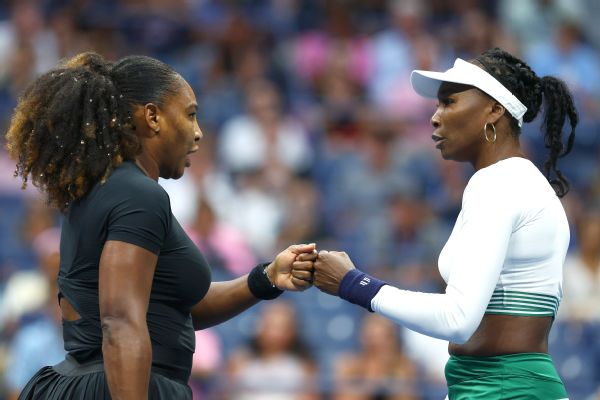 NEW YORK — In their first match together in over four years, and 25 years after their debut as a pair at the tournament, Venus and Serena Williams were unable to rediscover their signature magic and lost to Lucie Hradecka and Linda Noskova 7-6 (5), 6-4 in the first round of the US Open doubles on Thursday night.

In front of an adoring capacity crowd — the third in four days for Serena — that included Billie Jean King, NBA commissioner Adam Silver and Vogue editor Anna Wintour, the sisters had the primetime night slot on Arthur Ashe, something rarely seen in doubles. The pair clearly enjoyed playing alongside one another but struggled to find momentum after losing the tightly contested 72-minute first set in a tiebreak. After going down a break and falling into a 3-0 deficit to start the second set, they fought back to win three of the next four games, but it ultimately wasn’t enough.

Hradecka even apologized to the crowd after the victory during an on-court interview, acknowledging it wasn’t the result the fans wanted.

The US Open is expected to be Serena’s final tournament before she “evolves” away from tennis. Venus told reporters earlier this week that it was Serena’s idea to team up together one last time, jokingly calling her younger sister “the boss.” Together the duo has won 14 major doubles titles, including two in New York, and three Olympic gold medals. They had last joined forces at the French Open in 2018 and reached the third round.

Since Serena, 40, announced her impending departure from the sport with an essay in Vogue last month, fans have been flocking to catch a glimpse of the 23-time major champion in her matches and even during practice sessions. Both of her singles matches on Monday and Wednesday night broke attendance records at the tournament. Thousands gathered around the practice courts on Thursday for the sisters’ joint session two hours before the match, and screams of, “We love you, Serena!” and “Let’s go, Venus!” were heard.

Venus has yet to share any similar retirement plans, but at age 42 and having lost in the opening round in singles on Tuesday to fall to 0-4 since returning from a nearly yearlong hiatus, it seems clear her career is nearing its end.

Before the two took the court to 2Pac and Dr. Dre’s “California Love,” they were introduced with a video tribute showcasing their joint accomplishments on the doubles court. It was clear until the final point the pair was relishing the opportunity to play together again. While both remained focused with their trademark intensity, they looked at ease with one another, whispering to one another between every point, often using much of the time on the serve clock during their service games, and giving supportive high-fives, knowing glances and mouthing encouraging words.

When the match was over, the two embraced before walking over to the net to congratulate their opponents. They didn’t participate in a post-match interview but were given a standing ovation as they walked off the court.

While the sisters’ hopes for a 15th and final Grand Slam doubles title are over, Serena will look to continue her singles run as she takes on Ajla Tomljanovic in the third round on Friday night. She defeated No. 2 seed Anett Kontaveit 7-6 (4), 2-6, 6-2 on Wednesday with Venus sitting in the crowd, but said she wasn’t thinking about a record-tying 24th major just yet.

“I cannot think that far,” Serena said on Wednesday. “I’m here, like I said, I’m having fun and I’m enjoying it. Honestly, I’ve had so many tough matches the last I don’t know how long that I just feel like just being prepared for everyone that I play is just going to be really, really difficult.”