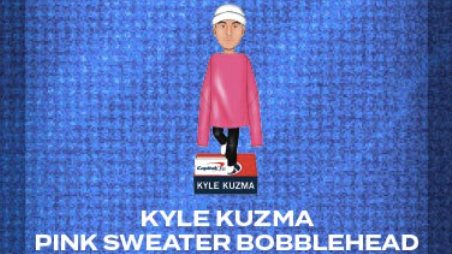 The Washington Wizards have announced a number of celebrations for their 25th anniversary season.

One of Capital One Arena’s more unique promotions will occur on Jan. 13, 2023 when the Wizards give away “lifestyle” edition bobbleheads of Kyle Kuzma. The collectible item references Kuzma’s famed pink oversized sweater that had the NBA world talking when he debuted it on Nov. 22

Two of his former teammates were among those that weighed in on the fashion statement.

“Ain’t no f—ing way you wore that!!!” commented Los Angeles Lakers star LeBron James on Instagram. “I’m not pressing the like button cause this is outrageous Kuz!”

Although James and Davis weren’t fans of the outfit, the first 2,500 fans to arrive at Washington’s game against the New York Knicks have a special item to look forward to.

Kuzma was involved in another team giveaway, as he designed a throwback-inspired hat for the first 10,000 fans who arrive to Washington’s Dec. 10 game against the Los Angeles Clippers.

From bobbleheads to bucket hats and more, here’s a look at Washington’s giveaways for the upcoming season.

Which giveaway are you pullin’ up to @CapitalOneArena for? 👀