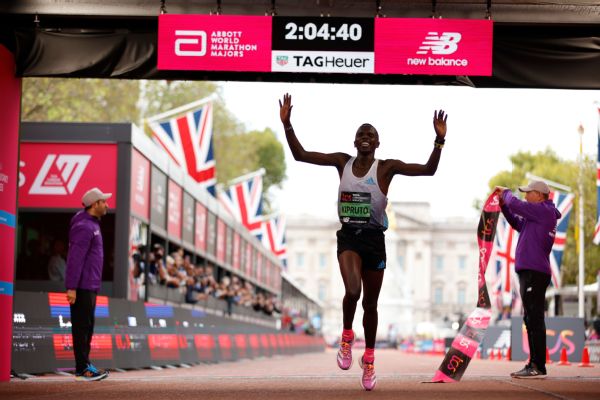 LONDON — Debutant Amos Kipruto, a world bronze medalist in Doha in 2019, won the men’s race at the London Marathon on Sunday, while Yalemzerf Yehualaw of Ethiopia recovered from a fall to win the women’s race.

Kipruto, a 30-year-old Kenyan, pulled away from the rest of the field as it reached the final five kilometers. He finished in 2 hours, 4 minutes, 39 seconds to beat Ethiopia’s Leul Gebresilase in second place. Bashir Abdi of Belgium was third.

The 23-year-old Yehualaw appeared to trip on a speed bump with six miles remaining but recovered to rejoin the leading pack and came home in 2:17:25, the third-fastest time at the event.

Yehualaw’s victory came just six months after making her debut over the distance. She is the youngest-ever London Marathon champion.

Defending champion Joyciline Jepkosgei of Kenya had to settle for second.

This year’s race is taking place in October for the third and final time, after it was moved in 2020 due to the coronavirus pandemic. It will return to its traditional April date next year.