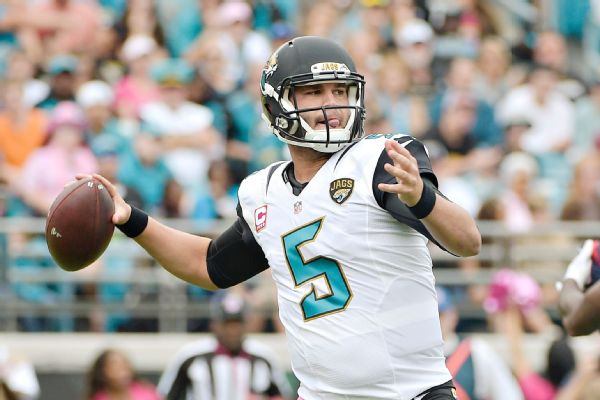 JACKSONVILLE, Fla. – Quarterback Blake Bortles, who led the Jacksonville Jaguars to a division title and the AFC Championship game after the 2017 season, says he has retired.

Bortles, the No. 3 overall pick in 2014, announced his retirement on an episode of the Pardon My Take podcast.

“I quietly… I didn’t tell anybody, I retired,” he said Wednesday, when asked if he was in good shape to sign with an NFL team. “I guess you guys are kinda the first to hear it publicly.”

Bortles had an up-and-down career with the Jaguars. He is second in Jaguars history in passing yards (17,646) and passing touchdowns (103) in 72 starts. His inconsistency was the reason the franchise decided to move on and signed Nick Foles in free agency in March 2019.

Bortles set single-season franchise records in passing yards (4,428) and passing touchdowns (35) in his second season, but he followed that with a disastrous 2016. His mechanics — especially his elongated delivery — deteriorated. He threw 16 interceptions, including three pick-sixes. He was admittedly somewhat of a mental mess. And the Jaguars won just three games.

The first part of the 2017 season wasn’t much better. Bortles had a five-interception practice early in training camp and got pulled from a practice days later. Coach Doug Marrone opened up the quarterback job after Bortles’ dismal performance in the second preseason game.

But Bortles won the job back, played solidly but not spectacularly for much of the season, was the league’s top-rated QB for three weeks in December, then played turnover-free football in three playoff games. He completed 60 percent of his passes for the first time and cut down on his turnovers significantly (16, which was five less than his average during his first three seasons).

Bortles’ performance in the playoffs — 594 yards, three TD passes and no turnovers in the Jaguars’ run to the AFC Championship Game — after his improvement in the regular season was what clinched the front office’s decision to sign him to a three-year extension worth $54 million with $26.5 million guaranteed.

Bortles struggled in 2018 and was benched twice before management, thinking the Jaguars were consistent quarterback play away from being a contender, signed Foles.

Bortles played in three games with the Los Angeles Rams in 2019, completing 1-of-3 passes for 50 yards. He also spent time with the Denver Broncos, Green Bay Packers and New Orleans Saints.