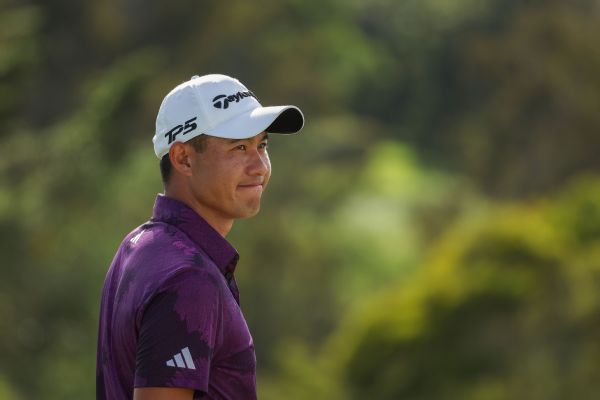 KAPALUA, Hawaii — Collin Morikawa seized on the stretch of scoring holes on the back nine at Kapalua to pull away from the elite field, making four birdies over his final five holes for an 8-under 65 and a six-shot lead in the Sentry Tournament of Champions.

No one could keep up with Morikawa, a two-time major champion who went to a putting coach late last year and is seeing it start to pay off. It makes for a frightening complement to his supreme iron play.

Morikawa has yet to make a bogey over 54 holes on the Plantation Course at Kapalua, and he has rarely come close. He made a 10-footer for par on the fourth hole to avoid a long three-putt, making that as pure as so many of his birdie.

“It’s been pretty simple today. Kind of over the past three days, where I’ve been looking is kind of where the ball’s been going,” he said. “I kind of know what I’m doing right and when I hit a bad shot, kind of what the mistake was. That’s the biggest thing.”

Morikawa is among 10 players at Kapalua who failed to win last year. Now it’s an elevated event with a $15 million purse, and the PGA Tour chose to expand the field to include anyone reaching the FedEx Cup finale at East Lake.

One more round like this, and Morikawa can be assured of a tee time for next year.

Scheffler, who along with Spaun started two shots behind, tried to keep up with Morikawa. The birdies dried up on the back nine, however, and Scheffler missed a 4-foot birdie putt on the par-5 18th that at least could have put him in the final group. He had to settle for a 69.

Fitzpatrick had five birdies over his last seven holes in his round of 66 and will be in the final group for his first trip to Hawaii.

Spaun dropped two shots on the back nine, one when his ball spun off the 13th green and rolled 50 yards down the fairway, the other when his second shot to the par-5 15th sailed left and into the native grass. He had a 69.

Max Homa had no trouble with Kapalua, making a career-high 10 birdies for a 63 and wondering exactly how he did it. That only got him to within eight shots of the lead.

“It didn’t feel like I played four shots better than my last two days combined, but I did,” he said. “It’s just not a very good game for your mind. But it was nice to shoot 10 under.”

Jordan Spieth was three shots behind to start the third round and lost ground with three bogeys in his round of 71.

Everyone is chasing Morikawa, and it looks to be hopeless.

Morikawa began his scoring with a 12-foot eagle putt on the par-5 fifth hole, made a tough 20-footer for birdie on the next and did everything right by doing so little wrong.

The turning point came early on the sixth hole after Morikawa and Scheffler each made eagle and the lead was still two. Morikawa made his 20-footer for birdie, while Scheffler went from a fluffy lie in the rough and came up just short of the green, and then took three putts to get down. The lead was four, and no one got closer than three shots the rest of the way.

Only seven players in PGA Tour history have ever lost a six-shot lead going into the final round, most recently Dustin Johnson at the HSBC Champions in Shanghai in 2017.

Asked the last time he had a big lead, Morikawa smiled and mentioned the Hero World Challenge at the end of 2021, when he led by five and shot 76 and tied for fifth.

The forecast was for lighter wind in the final round, and Morikawa said he expected players behind him to be firing at flags and trying to catch him.

From what Spaun saw of Morikawa in the second round, that might not be enough.