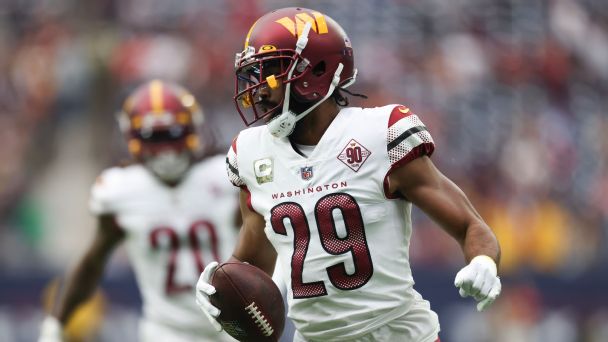 LANDOVER, Md., — Washington Commanders cornerback Kendall Fuller dropped a gift-wrapped interception deep in Dallas Cowboys territory. One play later, he got a chance to redeem himself — and it resulted in a touchdown.

Fuller picked off and returned a Dak Prescott pass 28 yards for a touchdown with 12:38 left in the second quarter. It gave Washington a 13-0 lead.

It was Fuller’s second pick-six of the season — he returned one 37 yards on Nov. 20 in a win at the Houston Texans.

His second occurred one play after he dropped a ball intended for receiver Michael Gallup, falling down at the 25-yard line. Had Fuller caught it and stayed on his feet, it would have been a touchdown.

But on the next play, Prescott tried to hit receiver Noah Brown cutting to the outside at the 30-yard line. However Fuller, in zone, cut inside and ran unobstructed to the end zone.