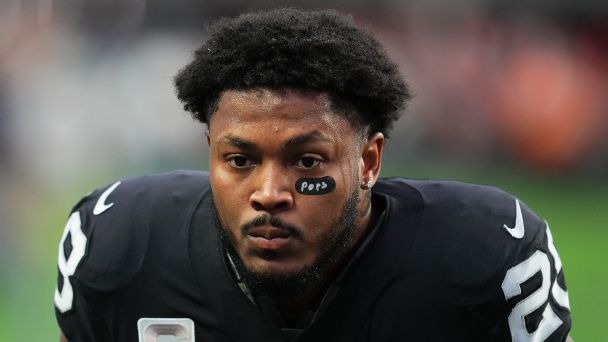 He had been back home in Tulsa, Oklahoma, with his ailing father Marty, who underwent emergency heart surgery Wednesday. Jacobs’ 6-year-old son Braxton was the one who found Marty in distress and called 911.

“My son and my dad are like best friends, you see one you see the other,” Jacobs said. “Man, I’m just happy [my son is] really smart enough to understand what’s going on in that situation and … my pops said he’s his hero.”

Jacobs returned to Las Vegas on a private jet late Friday night after Marty woke up and told him he should play in the season finale against the Kansas City Chiefs.

“I wasn’t going to come back,” Jacobs, who wore eye black under his left eye with the word “POPS” written on it, said after rushing for 45 yards in the Raiders’ 31-13 loss. “To me, family is always before anything. Especially with the severity of what’s currently going on.”

“This was probably the hardest game I’ve ever played. Not in a sense of physical, just mentally trying to stay in it. Being on the sideline and having too much time to think, think about what’s going on and think about stuff and being the rock of your family is never easy when the person that’s your rock is going through it.”

Playing for something bigger 🖤 pic.twitter.com/4y3WkwMCIT

Jacobs rushed for a career-high 1,653 yards this season. Jacobs can become the Raiders’ first NFL rushing champion since Marcus Allen in 1985.

Jacobs’ return, even as he dealt with hip and oblique injuries, made an impression on his teammates.

“He is one of the toughest people I’ve ever been around,” tight end Darren Waller said of Jacobs. “Some of the stuff that he’s fought through, the adversity that he’s overcome to just play and show up for the team and give what he’s got, I mean that’s a constant for him and guys respect that on a very deep level.”

Raiders coach Josh McDaniels said the decision to either return or stay by his father’s side was up to Jacobs.

“J.J. knew he had whatever he wanted from us, relative to support and we understood and respected the situation,” McDaniels said. “And if he had chosen not to [return], I would have completely understood that. But he came back and I give him credit, a ton of credit, for giving it a go and trying to help us win a game at the end of the season.”

“Everybody had my back with it,” Jacobs said. “That’s just the love that they’ve got for me, and I’ve got the same type of love for them.”

Jacobs is scheduled to become a free agent this offseason. But his long-term future is not on his mind.

“That’s all I’m caring about right now, trying to be there for my dad but also my son,” he said. “For [my son] to go through that experience without anybody being there, I tried to explain to him that he did good. He was thinking that he did something wrong. Just been a rough time.”

With the Raiders’ season over, Jacobs said he planned to return to Oklahoma as soon as possible.