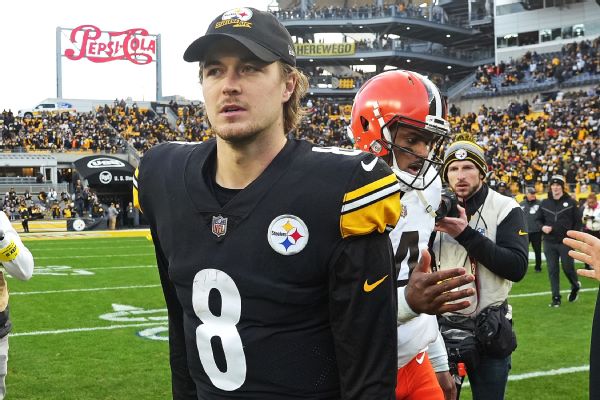 PITTSBURGH — Even after thumping the Cleveland Browns, a bitter AFC North rival, 28-14 in Sunday’s regular-season finale, the Pittsburgh Steelers came off the field quietly.

Somberly, they walked up the tunnel, shook the hand of strength and conditioning coach Garrett Giemont, then turned left into the Acrisure Stadium locker room for the last time this season.

Because while they avoided handing Mike Tomlin his first losing season as head coach with a 9-8 finish, the Steelers were shut out of the playoffs because the Miami Dolphins held on to beat the New York Jets 11-6 to clinch the AFC’s No. 7 seed.

“We would’ve had an opportunity if we had that chance,” quarterback Kenny Pickett said. “When you don’t take care of your own business, you don’t control your own destiny.”

While some players stayed locked into their own game, others kept close tabs on the scoreboard. The Jets and Dolphins spent large chunks of their game tied at 3-3 and then later at 6-6. And in Buffalo, the Bills distanced themselves from the New England Patriots in the second half, keeping the Steelers’ playoff hopes alive deep into the fourth quarter.

But with Dolphins kicker Jason Sanders‘ 50-yard field goal with 18 seconds remaining, the Steelers’ opportunity all but disappeared. Then it completely evaporated when New York’s Elijah Moore fumbled the ball out of the back of the end zone for a safety to end the game.

Every time he got a chance, cornerback Levi Wallace, who recorded his fourth interception of the season, checked the scoreboard for updates.

The entire stadium was keeping tabs on the Jets-Dolphins game, too, and fans began filing out when the Dolphins went up with 18 seconds left. At the time, the Steelers had less than two minutes to play.

Afterward, a stoic Cam Heyward sat at his locker and stared at the ground as he began to come to terms with the season suddenly being over.

“All we could focus on was trying to win this game,” Heyward said. “Obviously we needed help, and you never want to give another team control of your destiny.”

But even though the Steelers missed the playoffs, they still completed an impressive turnaround. After a 2-6 record at the bye, the Steelers finished 7-2. And with the win against Cleveland, Mike Tomlin extended his streak of non-losing seasons to 16, tying former Bears coach George Halas for the third-longest streak in NFL history.

“I definitely was playing for that for sure,” safety Minkah Fitzpatrick said. “That was definitely a motivating factor. You don’t want to be a name that’s on that roster. That’s something that not many coaches have done, so you wanna try and keep that alive as long as we can.”

Running back Najee Harris, who eclipsed 1,000 rushing yards for the second time to become the first player in franchise history to rush for 1,000 yards in his first two seasons, agreed with Fitzpatrick, adding that this win and season turnaround was a testament to Tomlin’s unwavering message and leadership.

“I think that for us to come together through all that adversity that we had early on in the year, for us to finish out the season the way we did, it should be motivation for us,” Harris said. “We should be hungry for next year. That’s what I was telling a lot of guys on the sideline when I saw the Dolphins won. I just shook Kenny’s hand and told him he had a great year. We’ve gotta do a lot as a team if we wanna be where we’re at next year, not waiting for the team to lose, to get in. We got a lot to build on to make the playoffs, but we accomplished not having a losing season from it. We just finished really strong.”