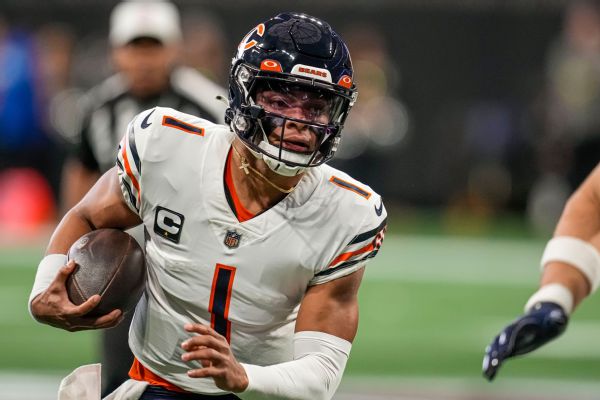 LAKE FOREST, Ill. — Chicago Bears quarterback Justin Fields estimated his hip to be around 80% when the team shut him down ahead of its season finale against the Minnesota Vikings.

Fields said his hip injury, which he sustained in a Week 17 loss at Detroit, “feels pretty good” during locker clean out at Halas Hall on Monday.

“I could’ve (played in Week 18) but I don’t know if I would’ve played my best game,” Fields said. The quarterback said the decision regarding his status was one made by trainers and not up to him.

The Bears lost 29-13 to the Vikings and ended up leapfrogging Houston for the No. 1 pick in the draft.

Fields finished his second season 64 yards shy of surpassing Baltimore’s Lamar Jackson for the single-season quarterback rushing record. As a team, Chicago set a new single-season franchise rushing record in Week 18 at 3,014 yards (Fields accounted for 1,143 yards) and finished as the league’s top rushing offense. On the flip side, the Bears had the worst passing attack at 130.5 yards per game.

Fields expressed disappointment in not being able to set the QB rushing record but has his sights set on a different one.

“Yeah, but it’s a rushing record and I’m a quarterback,” Fields said. “Of course, it would’ve been cool to have but I’m not really into records like that. If there was one record I’d like to break, of course it’d be a passing record, so we’ll see if we can get that done in the near future.”

The Bears will have ample opportunities this offseason to build their roster around Fields to help him achieve that goal. Chicago’s top priorities are along the defensive and offensive lines and at wide receiver.

In addition to having the top selection in the draft, Chicago also has the most salary cap space of any NFL team to utilize this offseason, which is an estimated $108.7 million, according to Roster Management System.

Asked whether he hopes to be a part of conversations about who the Bears aim to bring in on offense, Fields said he plans to “of course pay attention to who we get” and expressed optimism in GM Ryan Poles to build the Bears roster.

“I know Ryan has a great understanding of what needs to be done around here, what holes we might need to fill and stuff like that,” Fields said. “That’s not my job to control any of that. Whatever he needs me to do in terms of recruiting, I’m sure we’re going to have that conversation here in a bit. So, whatever he’s going to do, I fully trust him. His goal is to make the best team he can for us. I know he’s going to do a great job of that.”

Fields made his mark on a 3-14 Bears team that ended the season with on a franchise-worst 10-game losing streak. Over two transitional seasons in Chicago, Fields led the Bears to five wins while completing 60.4% of his passes for 2,242 yards, 17 touchdowns and 11 interceptions, along with 160 carries for 1,143 yards and eight rushing TDs.

On Monday, Fields made it clear that he views himself in the same light.

“I feel like (this franchise) it’s already mine,” Fields said. “The guys in here, they know how hard I work. They know what I want to accomplish and just my mindset overall. Really just trying to get guys on the same page, that mindset that culture to where no matter what we go through nothing can phase us, having that swagger, having that confidence going into every game like they have to play us, they have to beat us, so just have that mindset going into every game, we’ll be fine.”

Fields garnered support from teammates Monday as the Bears turned the page towards the offseason. While rookie left tackle Braxton Jones said Fields did a “phenomenal job” in his leadership role, defensive tackle Justin Jones vouched for the quarterback as the future of the Bears.

Jones added: “Once we start getting some more pieces around him and everything and start actually building an actual scheme for him that can really showcase every athletic talent he has, every ability that he has, it’s gonna be real, real dangerous out here.”