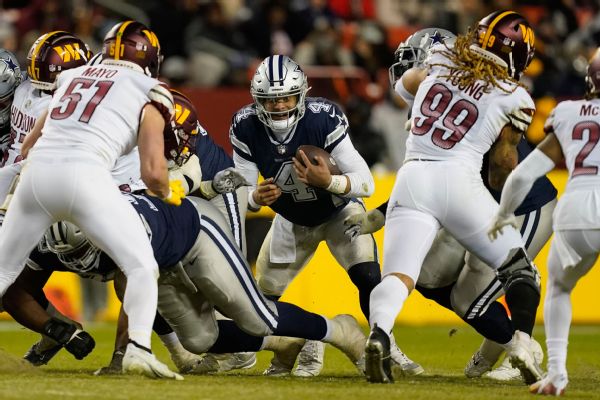 LANDOVER, Md. — The Dallas Cowboys entered Sunday with hopes of a second straight division title and the chance to move up to one of the top two seeds in the NFC if things went their way.

They left FedEx Field with their worst loss of the year, 26-6, to the Washington Commanders, throwing more questions into the mix regarding what the season can be with a wild-card game against the Tampa Bay Buccaneers next week.

“We get to suck on that all week,” owner and general manager Jerry Jones said. “If that doesn’t make you want to get ready to go in about six, seven days, nothing else will. That was as thorough a butt-kicking as we’ve had this year and we’re going to find out if that’ll get you ready or not. It should with what these guys are made of.”

The Cowboys’ previous worst loss of the season was a 19-3 defeat in Week 1 against the Buccaneers. The Cowboys will have to do something they have never done in order to advance in the playoffs: beat Tom Brady.

He owns a 7-0 record against Dallas, including wins the last two seasons with Tampa Bay.

“There’s no doubt in my mind that as a team, not just individually, but as a team we can come back and take this nightmare — whatever you want to call it — and turn it into a plus,” Jones said. “I’m thrilled that we’ve got the opportunity and I’m thrilled that we didn’t have to look over there at the Philadelphia game and the San Francisco game and say, ‘Boy, did we mess up.'”

Had the Eagles and 49ers lost, the Cowboys would have clinched the No. 1 seed in the NFC with a win over Washington. But they had a performance against the Commanders that was downright awful.

The special teams contributed two turnovers in the first quarter on Dallas’ side of the field. Even with Washington quarterback Sam Howell making the first start of his career, the Dallas defense was average, allowing 151 yards rushing on 41 attempts and coming up with just one interception.

But the offense was particularly miserable.

Dak Prescott completed a career-worst 37.8% of his passes (14-of-37) and was intercepted for the 15th time in 12 games. Prescott’s 15 interceptions tied Houston’s Davis Mills for the most in the NFL, despite the fact Prescott missed five games following thumb surgery. He also had an interception returned for a touchdown for the third time in the last four games.

“There was a lot more going on around really,” McCarthy said. “This is not about one guy. You can’t look at our offensive performance and blame it all on one guy. Plenty to go around.”

The Cowboys managed just 182 yards and converted 4 of 18 third-down opportunities, both season lows. The second-worst showings came in the loss to the Buccaneers to start the season (244 yards, 3-of-15 on third down).

“No, this one won’t linger,” Prescott said. “Yeah, I mean, it’s easy to go back and look at our body of work and what we’ve done, especially with this not anywhere in those past 16 games. So when you have a performance like this, whatever it was, whatever the reason may be, we’ve got to individually look at it, take accountability, learn from it and then understand when the plane touches down we’re on to Tampa.

“We know who they are. Played them twice these last two years, and it’s going to be a good one.”