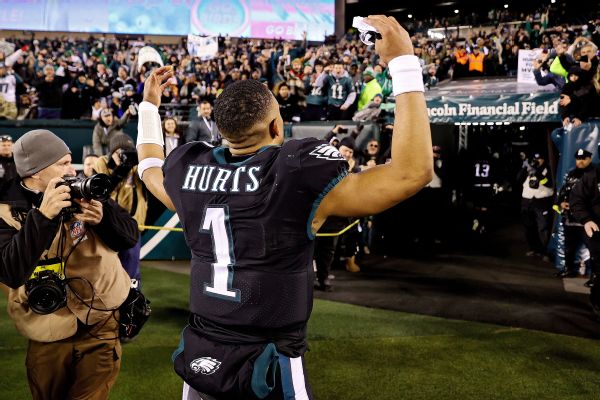 PHILADELPHIA — Jalen Hurts‘ return to the lineup wasn’t dazzling but proved an overall success, as the Philadelphia Eagles clinched the top seed in the NFC playoffs with a 22-16 win over the New York Giants in Sunday’s regular-season finale.

With a 14-3 record, the Eagles set a new high for regular-season victories, passing their mark set in 2004 and reached again in 2017. Philadelphia made it to the Super Bowl in each of those campaigns.

A third trip largely depends on the health of Hurts, who missed the previous two games with a sprained throwing shoulder suffered at the Chicago Bears on Dec. 18.

Hurts, who carried a questionable designation on the injury report this week, ended the day 20-of-35 passing for 229 yards with an interception and added nine carries for 13 yards.

His first pass was a 35-yard completion to good friend A.J. Brown. With that play, Hurts became the second Eagles player in franchise history with 3,500 pass yards and 500 rush yards in a season, joining Randall Cunningham, while Brown broke the team’s single-season receiving yards record previously held by Mike Quick (1,409).

The coaching staff largely stayed away from designed quarterback runs with Hurts coming off an injury, and he did his best to avoid contact, mostly successfully. The offense wasn’t as explosive with that dynamic missing, but it was good enough against a Giants team playing mostly backups with its playoff seeding already secured.

The Eagles clinched the NFC East title in the process, their first division title since 2019.

The NFC East has now gone 18 straight seasons without a repeat champion (the most recent being the Eagles, when they won four straight from 2001 to 2004). It is the longest such streak for any division in NFL history and also the longest active streak for any division without a repeat champion in the NFL, NBA, MLB and NHL, according to Elias Sports Bureau research.

The Eagles are the lone NFC team with a bye in the wild-card round. With right tackle Lane Johnson (abdominal tear), cornerback Avonte Maddox (toe) and other key players dealing with various injuries, the extra time off will be welcomed.