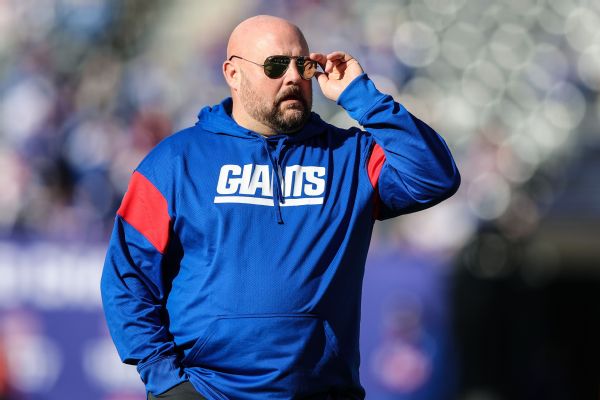 EAST RUTHERFORD, N.J. — The New York Giants only have one player on their 53-man roster who has won a Super Bowl. Many of their top players are making their first career postseason appearance this week against the Minnesota Vikings.

None of this seems to bother coach Brian Daboll.

“Really the experience is probably overrated, to be honest with you,” Daboll said. “It’s how you prepare, how you practice and, ultimately, how you play the game and coach the game on whatever day it is.”

That is nine of the Giants’ 10 captains having never experienced a postseason game. Only kicker Graham Gano has been to the playoffs and Super Bowl from his time with the Carolina Panthers.

The only Giant on the active roster who has ever won a Super Bowl is reserve wide receiver Marcus Johnson, who was a member of the Philadelphia Eagles when they won it all during the 2017 season.

New York (9-7-1) hasn’t made the postseason since 2016. Only Landon Collins and Sterling Shepard remain from that team.

The Giants ended a five-year playoff drought in Daboll’s first season as coach. They clinched their spot in the postseason with a Week 17 rout of the Indianapolis Colts. Now they have a rematch with the third-seeded Vikings, who beat the Giants last month on a 61-yard field goal as time expired.

Daboll doesn’t believe his team’s lack of experience will be a factor in Sunday’s rematch. He’s seen firsthand players excel in their first foray into the postseason.

“I don’t know. I’ve been in so many different situations,” Daboll said. “First year that I was part of a Super Bowl, the quarterback didn’t have any playoff experience there at New England. Some of the guys did, some didn’t.”

The player Daboll was referencing just happened to be Tom Brady. He was in his second year in the NFL and first year as a starter when the Patriots beat the St. Louis Rams and the Greatest Show on Turf in Super Bowl XXXVI. All Brady has done is won another six Super Bowls since and is considered by many the greatest quarterback of all time.

Daboll has been part of coaching staffs for five Super Bowl winners and a national championship team at Alabama.

He added: “No, really, I think [experience is] an overrated thing.”

If true, that would serve the Giants well. Barkley and many of his teammates have been waiting for this opportunity. Barkley had never been on a team with a winning record at the professional level until this season. Now, he gets a crack at showing what he can do in the playoffs.

It’s different in that there are no re-dos. It’s win or go home this time of the year.

“We’re excited because this is the stuff you dream about as a kid in the National Football League,” Barkley said. “Not many people on this team had an opportunity to play in the playoffs. It has been a tough couple years here and we finally have our shot. We feel we have a balanced team that complements each other really well. It’s a one-week season now.”