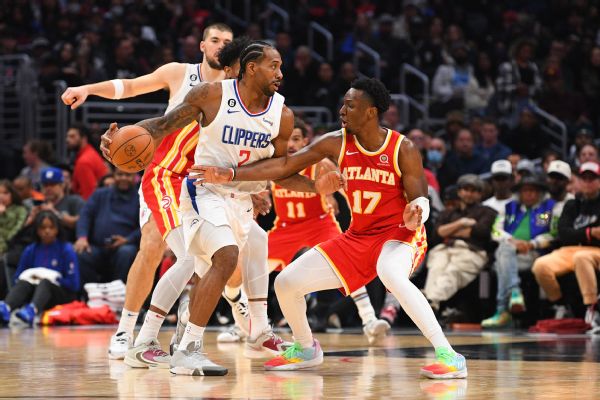 LOS ANGELES — Ty Lue tried shaking up his starting lineup by replacing Reggie Jackson at point guard, but the Clippers watched the Atlanta Hawks‘ Trae Young take over in the fourth quarter and deal Los Angeles a sixth straight loss.

The Clippers (21-21), a team that came into the season with championship expectations, are now mired in the longest losing streak of the Kawhi Leonard–Paul George era.

Leonard said this is a good test to see if the Clippers can persevere.

“I think it’s still good,” Leonard said when asked about the team’s chemistry while faced with its most adversity of the season. “Guys are still being positive.

“This is the spot where [the Clippers] see if you really enjoy the game and if we’re a team, seeing if we can dig out this hole. It is fun. It’s a good challenge for us.”

The Clippers have not been able to stay healthy and did not have George (right hamstring) for a second straight game. Luke Kennard was also out with a calf issue.

But the Clippers also have played stretches during this slump with a lack of defense, energy, urgency and pace. Lue decided to insert Terance Mann in the starting lineup for Jackson, who had been the starting point guard for the past two-plus seasons. Jackson played only eight minutes, all in the first half, and was held scoreless.

“I thought defensively we were really good,” Lue said. “Just still learning how to play with TMann at the point guard position, but, when PG gets back, he can help with that as well. I thought overall it was pretty good.”

When asked if Jackson is the odd man out in the rotation right now, Lue said he is searching for ways to get the Clippers back on track.

“No, I just think tonight it was Reggie,” Lue said. “Then tomorrow, it could be somebody else. Just kind of experimenting with different things. When you lose five games in a row, you want to try some different things.”

Now the Clippers will try to halt their slide against Luka Doncic and the Dallas Mavericks on Tuesday at home. After that, the Clippers face two-time reigning MVP Nikola Jokic and the Nuggets at home after losing by 31 in Denver last Thursday.

Batum also said the players will stick by Jackson after the fan favorite didn’t play in the second half.

“It’s not easy for some players for some games like that,” Batum said. “Got to keep talking to Reggie. I mean how many times has Reggie saved us [before]? That’s why people love him. It’s why they chant his name because he’s a big player … yes it’s tough because we want to have Reggie on the court, we want to see Reggie perform, but tonight Coach made some choices.

“So we have to stick with our brother… He already knows like what he can bring to this team. So we’re going to need Reggie at some point.”

Aaron Rodgers to contemplate future after 'emotion' of season has passed