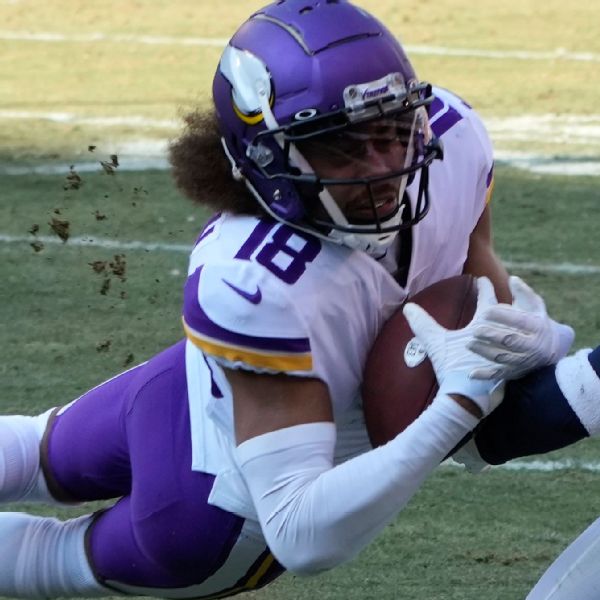 CHICAGO — Justin Jefferson did indeed make his mark on NFL history this season. It just wasn’t the record that he was most hoping for.

The Minnesota Vikings receiver became the youngest player ever to lead the league in catches and receiving yards, according to ESPN Stats & Information research. At 23, Jefferson is 136 days younger than Green Bay Packers receiver Don Hutson was when he lead the league in both categories in 1936.

Jefferson caught four passes for 38 yards Sunday in the Vikings’ 29-13 victory over the Chicago Bears, setting his league-high totals at 128 receptions for 1,809 yards. It was the sixth-most receiving yards for a season in NFL history, and was perhaps the most critical factor in the Vikings’ 13 victories, but it fell short of Calvin Johnson’s record of 1,964 yards set in 2012.

“It’s tough,” Jefferson said, “but I feel like I reached my main goal. My main goal was 1,800, coming off 1,600 last year. Of course I wanted to exceed that goal and get to 2,000. But it’s just another opportunity for next year, something to strive for. But as long as we’re in the playoffs, as long as we keep fighting and having extra games, it doesn’t really matter. I feel like I did a lot for this team this season, doing whatever I needed to do when the ball was in the air and touched my hands. It’s disappointing individually but there’s so much more to fight for than this record.”

A late surge helped Jefferson break the team record for catches and receiving yards in a season by Week 16 and put him in range to challenge Johnson. But the Packers limited him to one catch for 15 yards in a Week 17 loss at Lambeau Field, meaning Jefferson needed 194 yards Sunday.

Because the Vikings had already clinched the NFC North, and their NFC playoff seeding was guaranteed to be no lower than No. 3, coach Kevin O’Connell pulled Jefferson and most other starters from Sunday’s game at halftime.

“I felt like it was going to be a long shot getting it,” Jefferson said. “But you never really know what happens. I just knew I had a limited amount of opportunities in this game, knowing that I was not going to play in the second half.”

O’Connell was the Los Angeles Rams‘ offensive coordinator in 2021 when receiver Cooper Kupp made his own challenge to Johnson’s record. Kupp fell 17 yards short, and upon arriving in Minnesota after the season, O’Connell challenged Jefferson to be fill that role in the Vikings’ version of the Rams’ scheme.

Quarterback Kirk Cousins targeted Jefferson on 181 passes, tied for the 11th-most for a single season since at least 2000. He suffered no significant injuries and dropped only one pass, according to ESPN Stats & Information research.

Speaking after Sunday’s game, Cousins marveled at how Jefferson improved in each of his three seasons. He totaled 1,400 receiving yards as a rookie in 2020, and progressed to 1,616 in 2021 before making a run at Johnson’s record this season.

“Eventually he will run up against a ceiling, probably, but I’m excited to see what he can do moving forward and then in playoff football, when the lights get even brighter, allowing him to shine there too. Excited for that and the big games he has up ahead in his career. So, so grateful that we drafted him, that we have him, and that I get to play with him and get to throw the football to him.”