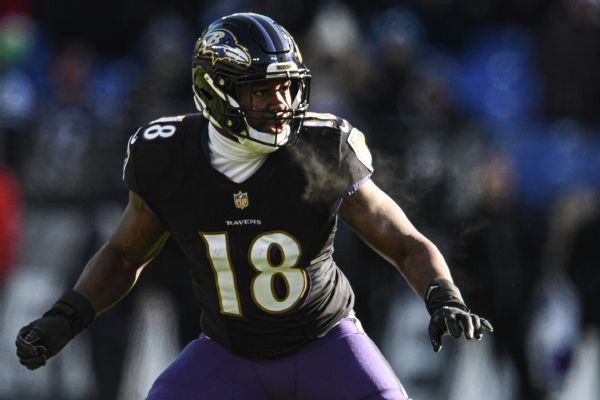 OWINGS MILLS, Md. — Pro Bowl middle linebacker Roquan Smith is set to remain the centerpiece of the Baltimore Ravens‘ defense beyond half a season.

Smith reached an agreement on a five-year extension on Tuesday, a team source confirmed. The NFL Network is reporting the deal is worth $100 million, which would make him the highest-paid inside linebacker in the league at $20 million per season.

The extension with Smith not only will keep Baltimore’s top defensive player from becoming a free agent in two months, but it will free up the Ravens to use the franchise tag on quarterback Lamar Jackson, who is finishing out the fifth-year option on his rookie contract.

Smith, 25, lived up to expectations since the Ravens acquired him in October from the Chicago Bears for second- and fifth-round picks in the 2023 draft. A leader and tone-setter, Smith finished as the NFL’s third-leading tackler this season (169) for a Baltimore defense that allowed the third-fewest points (18.5), and he was named to the first Pro Bowl of his career.

“He wants to do the things that are required to be a great player and to be a great unit and then to impact your team,” Ravens coach John Harbaugh said of Smith on Monday. “That’s what he’s all about — 100% — [and] that’s what I love about him. He’s one of the top guys I’ve ever seen that way, and I think that does always impact everybody as a leader, for sure.”

Smith has been the most impactful player in the second half of the season for Baltimore. In the Ravens’ first eight games without Smith, the defense ranked 20th in points allowed (22.9) and 24th in yards given up (364.3). In their nine games with Smith, the defense allowed the NFL’s second-fewest points (14.7) and held teams to the third-fewest yards (288.8).

He is the first player since Hall of Fame linebacker Ray Lewis to record at least 100 tackles, multiple sacks and one interception in each of the first years of a career.