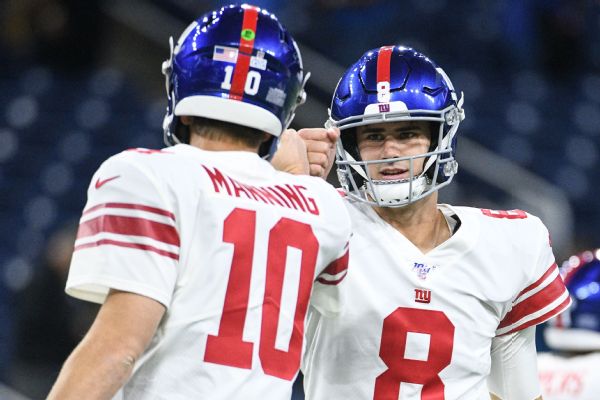 Jones called Manning late this week as part of his preparation for Sunday’s wild-card matchup with the Minnesota Vikings and asked for his advice.

That makes sense for Jones given how this season has unfolded. After the fifth-year option in his rookie contract wasn’t picked up before the season, Jones had the best year of his young career, finishing with just eight turnovers in 16 starts and ranking seventh in Total QBR (a career-high 60.7).

This season was also the first time in Jones’ four years as the starting quarterback that he ever had a winning record at any point. The Giants hadn’t been to the playoffs since 2016, which was the final time Manning reached the postseason.

Manning, who led the Giants on a pair of legendary Super Bowl runs following the 2007 and 2011 seasons and twice took home Super Bowl MVP, was teammates with Jones during his rookie season in 2019. They have remained friendly, with Manning still living in the area and having a role in the organization.

It’s not lost on this current group of Giants that their legacy will ultimately depend on how they perform in the postseason.

“These games are the most meaningful games you can go play. And huge opportunities,” Jones said. “But it’s about the team. It’s about what we do as a group and how we’re remembered collectively rather than how any individual is remembered. Think we have a group of guys with that mindset.”

Included in that group are a large majority of the Giants’ starters. Key players such as running back Saquon Barkley, left tackle Andrew Thomas, top wide receiver Darius Slayton, defensive linemen Dexter Lawrence and Leonard Williams, and safeties Julian Love and Xavier McKinney will all be making their playoff debuts. The postseason is where they could cement their legacy if they are to be mentioned in the same sentence as players like Michael Strahan, Lawrence Taylor and Manning.

It should help that the Giants are the healthiest they have been perhaps at any point this season. They didn’t list a single player on the active roster with an injury designation Friday.

That means cornerback Adoree’ Jackson (knee) will return after missing seven games. He will help the Giants try to slow Vikings All-Pro wide receiver Justin Jefferson, who had 12 catches for 133 yards and a touchdown in their previous meeting three weeks ago.

Williams (neck), outside linebacker Azeez Ojulari (ankle), right tackle Evan Neal (ankle) and wide receiver Marcus Johnson (knee) will also play after being limited in practice at some point during the week.