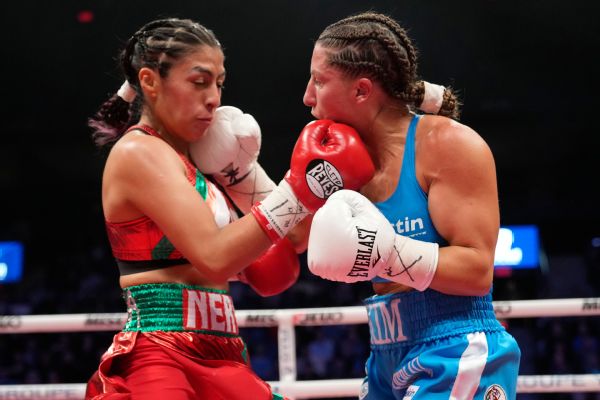 It was the first major women’s fight of 2023 — and by the end of the year, it might be remembered as one of the best, too.

Jessica Nery Plata, who entered the fight as the WBA junior flyweight champion, left the ring as the unified champion after beating WBC titleholder Kim Clavel by unanimous decision.

Nery Plata (29-2, 3 KO) showed early on in Place Bell in Laval, Canada, that she would be willing to stand in and trade punches with Clavel. And it was her punches that did the most damage throughout the fight.

Clavel (16-1, 3 KO) kept almost every round close, but Nery Plata seemed to often close each round with the stronger and more effective combinations, particularly using her right jab to set up everything else she was attempting to throw.

Nery Plata consistently caused more issues, including in the final round, when it looked like Nery Plata might have stunned Clavel as the two were exchanging punches in the center of the ring.

It was the eighth straight win for Nery Plata and first defense of the WBA title she won in March 2022, when she defeated Yesica Yolanda Bopp in Panama. It’s also the second straight fight Nery Plata has fought outside of her native Mexico, where she fought the first 29 fights of her professional career.

Nery Plata is the only current titleholder in the division; the WBO and IBF titles won by Yokasta Valle in November when she beat Evelin Bermudez have been vacated.

It was the first professional loss for Clavel, 32, who was making the first defense of her WBC title she won by defeating Yesenia Gomez last July.