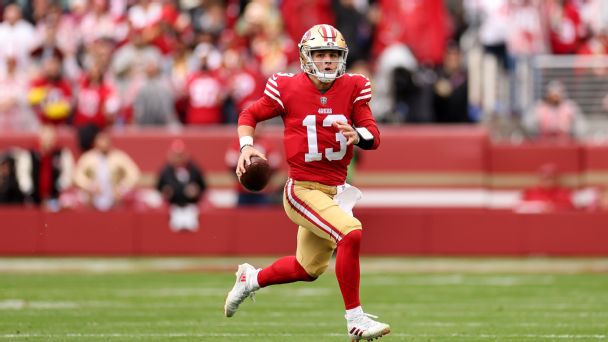 SANTA CLARA, Calif. — San Francisco 49ers quarterback Brock Purdy had some rough spots early in Saturday’s wild-card game against the Seattle Seahawks, but when the Niners needed him most, he delivered.

Clinging to a six-point lead with the ball at Seattle’s 7 and 14 minutes, 2 seconds to go, Purdy dropped back and rolled to his left as the pocket collapsed. With nothing available there, he rolled back to his right and found wide-open running back Elijah Mitchell for a walk-in touchdown.

Sprinkle me! @brockpurdy13 keeps the play alive to find @EliMitch15 for the TD 🙌

Purdy let out a wild celebration that drew loud applause from the fans, then hit tight end George Kittle for a 2-point conversion to make it 31-17.

It was Purdy’s second touchdown pass of the day, giving him seven straight games with multiple touchdown passes. That ties him with Justin Herbert for the most consecutive games doing that by a rookie since 1950 and with Steve Young for the most by any quarterback in franchise history.

Purdy and receiver Deebo Samuel put an end to Seattle’s upset dreams with 10:51 to go, as Purdy found Samuel on the left side and, with the aid of a strong block from wideout Brandon Aiyuk, Samuel raced 74 yards for a touchdown to make it 38-17.