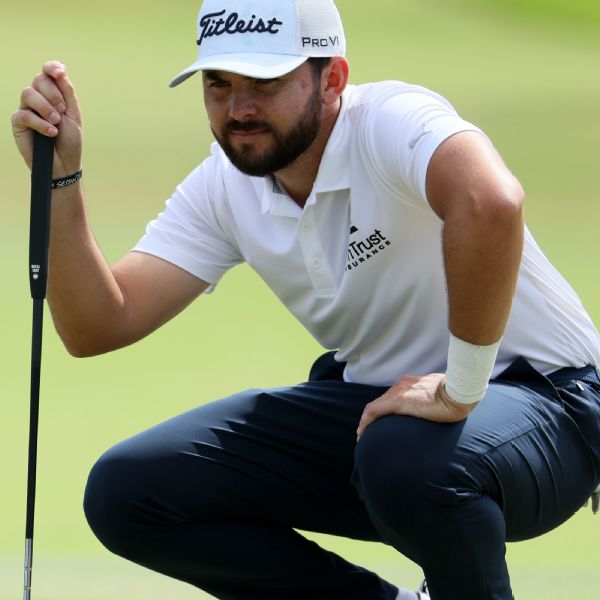 HONOLULU — Hayden Buckley started and ended the back nine at Waialae with eagles Saturday for a second straight 6-under 64, giving him a two-shot lead and creating some separation going into the final round of the Sony Open.

Buckley holed out a wedge from 133 yards on the 10th hole. He finished his day with an approach to 2 feet on the par-5 18th hole.

He was at 15-under 195, and his two-shot lead might have been the biggest surprise in a third round that at one point featured an eight-way tie for the lead.

Even now, Buckley has a long road ahead of him. In his second year on the PGA Tour, he had never had the lead after any round. And five players are within three shots of the lead on a tour where it seems no lead is safe. Only last week, two-time major champion Collin Morikawa lost a six-shot lead on the back nine at Kapalua.

Nine of the leading 15 players at Waialae have never won on the PGA Tour.

Buckley led by two over Chris Kirk (68), Ben Taylor (65) and David Lipsky (66), the Californian who has spent the majority of his career in Asia.

Kirk began the third round with a one-shot lead and good vibes because of his runner-up finish two years ago that enabled him to keep full status on tour. His first shot sailed toward the houses down the right side of the first fairways, out-of-bounds and leading to a double bogey.

He was otherwise solid from there, though he missed a 6-foot birdie putt on the 18th that would have put him in the final group.

Lipsky knows the feeling. His opening drive went left, and bounced along the cement path right of the driving range until it settled outside the white stakes. He managed to limit the damage to a bogey when he made a 25-foot putt. He followed that by taking two chips to get onto the second green for another bogey, and then he had seven birdies the rest of the way.

“It’s never ideal when your ball goes 50 yards down the path OB,” Lipsky said. “I’m pretty happy with how I played and how I handled those first two holes.”

While the third round wasn’t a bizarre as Friday — Jordan Spieth went from a share of the lead to missing the cut, Rory Sabbatini was one off the lead until three straight double bogeys — there was enough to realize 18 more holes might feel like a marathon to those trying to win for the first time.

S.H. Kim, the rookie from South Korea, ran off four straight birdies to take the lead at the turn. And then on the 10th hole, the third easiest at Waialae, he had 124 yards from the middle of the fairway and made double bogey — an approach that bounded over the green, a chip to 30 feet and three putts.

Byeong Hun An had a 66 and was tied for 16th, six shots behind. That includes his quadruple-bogey 8 on the 10th hole after his drive was in the middle of the fairway, 87 yards from the hole. An went long going after a back pin, muffed a chip, twice had a wedge slide under the ball sitting in thick grass. It was a mess.

Andrew Putnam and Nick Taylor each had a 62, the low round of the tournament. That got Putnam within three shots of the lead. Taylor made the 36-hole cut on the number and goes into the final day five shots behind.

Bengals' Joe Burrow wants to be in Cincinnati his whole career