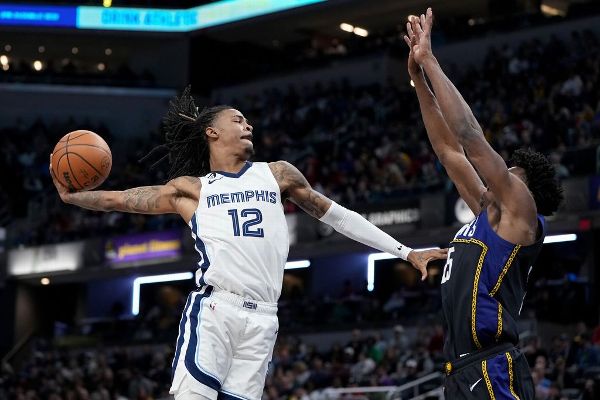 INDIANAPOLIS — Ja Morant had 23 points, 10 assists and another ferocious dunk as the Memphis Grizzlies beat the Indiana Pacers 130-112 on Saturday night to extend the NBA’s longest current winning streak to nine games.

Desmond Bane scored 25 points to lead the Grizzlies, who tied Denver for the Western Conference’s best record at 29-13.

Neither Bane nor Morant was needed in the fourth quarter. Morant’s soaring slam over Jalen Smith made it a 20-point game with 4 minutes, 20 seconds left in the third, and Memphis led by as many as 34 in the fourth.

The game was tied in the second quarter before Memphis outscored the Pacers 27-11 to take a 68-52 lead at halftime. Morant had five points and four assists during that span.

Santi Aldama added 17 points and Ziaire Williams 13 for the Grizzlies.

The Pacers, missing two starters, have lost three in a row. Point guard Tyrese Haliburton, Indiana’s leading scorer and the NBA assist leader, is expected to miss two weeks after suffering a left elbow strain and left knee contusion on Wednesday. Center Myles Turner, who averages 17 points, is out with back spasms.