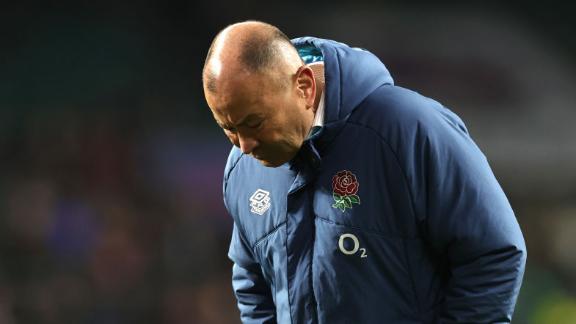 Rugby Australia chairman Hamish McLennan says he wants Eddie Jones to bring out the “slightly feral, slightly mongrel’ Australian characteristics that went missing under Dave Rennie, while the veteran coach is adamant he has enough time to change the Wallabies’ course for this year’s World Cup.

News of Jones’ appointment on a five-year deal by Rugby Australia, and Rennie’s subsequent dismissal, sent shockwaves around the rugby world as another of the global coaching dominoes fell into place on Monday.


Given his previous public backing of Rennie through to this year’s tournament in France, McLennan was left with some explaining to do. But the RA chairman defended his maneuvering behind the scenes, a process he says began in his first few months in the job, despite no formal move for a coaching change in 2023 being made until Jones was sacked as England coach by the Rugby Football Union.

“I actually started [as RA chairman] in June 2020 and my instinctive feel was that Eddie was the best coach in the world, if not one of the best coaches in the world and we needed to get more talent like that back. So when we did the spring tour in 2021 Andy Marinos and myself met up with him,” McLennan told the Sky Sports Radio on Tuesday.

“So we were really thinking about what does our coaching structure look like from 2024 onwards and we were in the middle of the bidding for the World Cup for ’27 in Australia. Eddie was very happy with his coaching role in England and saw himself going through to the end in ’23, so we kept in contact, but our sole focus was what do we do from ’24 onwards.

“Now we stumbled through the spring tour last year, it wasn’t a great result for us, and then amazingly, and I still can’t quite believe it, the RFU cut him. So we got on the phone to him and just said ‘where’s your head at; what do you want to do? And I think there was a sense that Eddie wanted to come home and I think that as he’s grown and evolved as a coach and a human, he’s got better with age. And so it just felt right that we get him back.”

Knowing Jones was likely to be field multiple coaching offers, McLennan and his RA team moved quickly to repatriate Jones to the Wallabies, a role he was sacked from way back in 2005.

Now, just five weeks after he had been dismissed by the RFU, Jones already has his next assignment.

But the former Brumbies, Reds and Japan coach has little more than eight months to change the Wallabies’ trajectory for the World Cup, and just five Tests beforehand to imprint his own style on a team that managed only five wins from 14 games in 2022.

“I think we’ve got plenty of time,” Jones told The Today Show when asked about the World Cup. “[Former Wallabies coach] Bob Dwyer, who won the World Cup in 1991, always used to say ‘if you can’t change a team in a week, you can’t coach’.

“We’ve got more than a week, so let’s hope I can coach…It’s a fantastic opportunity. It wasn’t so much satisfaction but it was nice to get the opportunity to get another go at the Wallabies and help lift Australian rugby back where we’d like it to be. That’s a good feeling but there is a lot of work to do.”

McLennan, RA, and the entire Australian rugby community will be banking Jones’ ability to make rapid progress, with opinion seemingly split down the middle about the board’s shock coaching switch.

Rennie had only last week laid the foundations for his 2023 plans when a 40-man playing group had gathered on the Gold Coast for a four-day camp, the New Zealander batting away any speculation that Jones could join his own coaching group that was still reeling from the loss of assistant Scott Wisemantel.

But McLennan said Jones was already deep into his Wallabies planning, the chairman revealing his desire to see some missing Australian traits return to the national side.

“Well he’s pretty much already mapped out this year, and so he’s forensic in his approach, he’s tough, and tactically he’s a genius, in my opinion,” McLennan told Sky Sports Radio.

“So you’ve got somebody who grew up in Sydney club rugby and so he knows those pathways and he knows the competitive dynamic, so he’ll just bring a deft touch to everything that we do.

“He’s tough, I want that slightly feral, slightly mongrel, sort of Australian characteristic to come out, and we’ve got to be tougher and a bit more persistent on the field, and he’ll bring it out. And people evolve and change in life, so he’s a better coach than 20 years ago, he’s the first to say that, he’s changed, I know he polarises people; but as we said ‘buckle up, it’s going to be fun’.”

While disappointed with Australia’s 2-3 spring tour, which included a first ever loss to Italy in 19 Tests, McLennan was buoyed by the fact the Wallabies got so close to the top two ranked sides in world rugby: Ireland and France.

“I actually don’t think we’re that far off; the very fact that at Stade de France we got within a few points and we should have won that, and then Ireland who are No. 1 in the world, again we fell short,” he said.

“It’s about how we close games up and push it just a little bit further, which is why Eddie and Rugby Australia is so energised by his appointment. We think tightening a few things up we can give it a real shake and we’ve got a pretty good draw, too, for the France World Cup.”

Tua Tagovailoa to remain starting QB; Dolphins expect him to be ready